We’ve officially reached the second half of the NFL schedule. The games are bigger, as are the stakes.

Last week, FanDuel Sportsbook announced that it will start offering look-ahead prices about 10 days before kickoff (the Wednesday of the prior week). This is a common practice in Nevada and we’re curious if other New Jersey sportsbooks will follow suit.

This is a good thing for all parties. Players can strategize and try to find value in a longer window, while the books have more time to collect data and find out what’s best for their clientele.

Here’s a look at the spreads and totals for the Week 10 NFL slate at NJ sportsbooks. 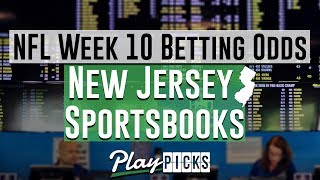 Panthers at Steelers (-4): Intriguing matchup to start between two hot teams in playoff positions. Look for value in this one: Most books dropped this line from PIT -5.5 early Monday morning. While it’s moving through a dead number, that 1.5-point move is eye-raising.

Cardinals at Chiefs (-16.5): This is a huge number to swallow but the Chiefs are 7-1 ATS this season and the market continues to adjust. After opening at KC -13 on FanDuel last week, the line moved 3.5 points after KC’s thumping of Cleveland on Sunday. The Cardinals are coming off the bye.

Falcons (-4) at Browns: Recency bias goes to the Falcons after their big win over Washington (and Cleveland’s continued dysfunction). Matt Ryan enters only 3-7 against the AFC North but did win his only start at the Browns in 2010.

Bills at Jets (-7.5): The Jets enter having won six of the last eight at home against Buffalo. This is a big number to cover considering the total opened at only 37.5 and the Jets offense ranks near the bottom of the league in scoring.

Lions at Bears (-6.5): Chicago hosts Detroit with a chance to extend their divisional lead over idle Minnesota. Detroit has won nine of the last 10 in the rivalry. FanDuel gave the visitors a half-point extra value on Monday.

Jaguars at Colts (-3): Two teams fighting to stay alive in the AFC South. This is a streaky series: Jacksonville has won four of the last five after dropping six straight to Indy. Fanduel gives the visitors a half-point extra value.

Saints (-5) at Bengals: Drew Brees has split four starts against Cincinnati and enters only 9-11 overall against the AFC North. Pricing disagreements on this game at open: BetStars gave a half-point extra value to the visitors and a full point to the over. FanDuel offered a full point to the Saints and over.

Redskins at Buccaneers (-2): Interesting pricing decision at open even with Ryan Fitzpatrick entering 4-1 in his career against Washington. BetStars and William Hill offered a half-point extra value to the home team, while FanDuel gave that half-point to the visitors. Watch this line over the week.

Patriots (-6) at Titans: FanDuel was the only book with this game on the board on Monday. Tom Brady enters 5-1 against Tennessee, with the loss coming back in 2002.

Chargers (-10) at Raiders: Phillip Rivers enters 17-8 against Oakland, his best record against any team. William Hill gave LA’s new AFC tenant a half-point extra value on Monday. Teams that lost on Thursday have bounced back to a 5-3 record the next week.

Seahawks at Rams (-10): LA has won five of the last seven in this rivalry including a 33-31 decision last month. The Rams have failed to cover four of the last five games so this number could move significantly.

Dolphins at Green Bay (-9): FanDuel was the only NJ book pricing this game as Ryan Tannehill’s status remains uncertain. Brock Osweiler has lost his only matchup against the Packers but is 4-3 overall against the NFC North.

Cowboys at Eagles (-5.5): Remember last year when Vegas opened this game at Philly -3.5 and everyone bought in? Then the line moved to -7 and the Eagles still covered and Vegas got soaked? Yeah, this time the books are ready.

Giants at 49ers (-3): Sadly, this game can’t be flexed out for any of the much better choices on the Week 10 slate. Eli Manning does enter 5-3 against San Fran, including the 2011 NFC Title game win.