The Green Bay Packers and San Francisco 49ers will face off at Levi’s Stadium for the NFC Championship Game on Sunday afternoon. The game will mark the 69th meeting in a series the Packers lead, 36-31-1. This marks the eighth postseason meeting between Green Bay and San Francisco. The most recent regular-season game between the teams unfolded in Week 12 of the 2019 season, a contest the 49ers won by a 37-8 score at Levi’s. The last postseason contest between the teams occurred Jan. 5, 2014, when the 49ers defeated the Packers, 23-20, in an NFC Wild Card game.

The 49ers opened as seven-point favorites on both FanDuel Sportsbook and DraftKings Sportsbook and the line moved to 7.5 as of Monday afternoon and stayed there all week. Both squads were impressive in their divisional-round wins. However, San Francisco was far more dominant in their 27-10 dismantling of Minnesota than Green Bay was in their 28-23 squeaker of a win versus the Seahawks. Moreover, as mentioned earlier, the Niners handed the Pack their worst defeat of the campaign this past regular season.

The total opened at 45 points but had been bet up to 46.5 as of Friday. The number represents a balance between each team’s solid offensive capabilities and their impressive defensive squads. The Over had a particularly poor record in the Packers’ games this season (detailed further below), while the 49ers have allowed the fewest passing yards per home game (154.3) of any team this season and postseason. But, it’s worth noting five of the 49ers’ eight home games during the regular season exceeded Sunday’s projected total, while another landed right on it.

The Packers unsurprisingly leaned heavily on their three best skill-position players – Aaron Rodgers, Aaron Jones and Davante Adams – to notch a tough win over the Seahawks in Sunday’s divisional-round battle. That philosophy worked perfectly against Seattle. Rodgers threw for a pair of touchdown passes and 243 yards overall. Jones accounted for 64 total yards and a pair of rushing scores. And Adams put up a stellar 8-160-2 line on 11 targets.

There’s a flip side to that coin, however, and it’s one that could represent Green Bay’s biggest challenge/obstacle against the 49ers. That narrow distribution of touches that inordinately focuses on Jones and Adams is essentially the norm for the Pack’s offense. Against the Seahawks, Jones and Rodgers accounted for 76 of Green Bay’s 109 rushing yards. Adams was responsible half of Rodgers’ 16 completions, well over half his 243 passing yards and both his passing touchdowns. Jimmy Graham was the second-most productive Packers pass catcher with a modest three catches for 49 yards.

As already cited, the 49ers’ pass defense is an absolute black hole for opposing air attacks. Kirk Cousins was the latest to experience that first-hand. He was limited to 172 passing yards and 5.9 yards per attempt in Saturday’s loss. And that’s with two upper-tier wideouts in Stefon Diggs and Adam Thielen at his disposal. Rodgers will have no such luxury. The likes of Allen Lazard and Geronimo Allison have proven adequate at times as complements to Adams. Yet neither has come anywhere close to showing the consistency of a true No. 2 wideout.

The matchup on the ground shapes up as essentially just as difficult for Jones. San Francisco has allowed 107.2 rushing yards per game this regular season and postseason. Yet their home average is now under 100 yards per contest (99.1) after they impressively stymied Dalvin Cook to the tune of 18 yards on nine carries. That naturally doesn’t bode well for Jones, who only averaged 3.0 yards per carry against a Seahawks defense that isn’t as good as San Francisco’s.

For the 49ers, Jimmy Garoppolo only had to put up 19 attempts against Minnesota. A combination of an effective running game and San Fran’s defense helped ensure that he could play much more of a game manager role. However, it’s likely to be a different story versus the Packers. The fact Rodgers is on the opposite sideline could potentially dictate a more aggressive approach, although game script will be the ultimate determinant. The matchup against the Packers’ secondary is about average; Green Bay allowed 233.0 passing yards per road contest this past regular season. Garoppolo had little trouble in the regular-season matchup versus the Packers, throwing for 253 yards, averaging 12.7 yards per attempt and tossing a pair of scores.

San Fran’s rushing attack therefore remains unpredictable, but highly diversified. Saturday’s win over the Vikings saw Tevin Coleman reemerge for the 49ers with 22 carries, 105 yards and a pair of rushing touchdowns. Raheem Mostert (12-58) was excellent as a complementary option versus Minnesota. Meanwhile, Matt Breida, who saw just eight carries Saturday, is on hand as arguably the best “third option” in the league.

The Packers lead the all-time series with the 49ers, 36-31-1. Green Bay has won two of the last three games in the series. However, San Francisco won the most recent meeting by the aforementioned 37-8 score in Week 12 of this past regular season. The 49ers have prevailed in five of the last seven meetings overall, dating back to Week 1 of the 2012 season.

Watch as Matt Brown reveals his betting picks and predictions for 49ers vs. Packers, including thoughts on the spread, moneyline, total, and props for the game. 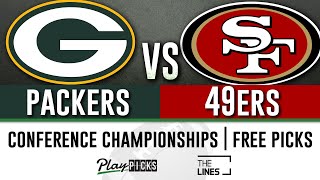