The PGA Tour begins the Florida Swing for the season’s first World Golf Championships event at The Concession Golf Club in Bradenton. A total of 48 of the top 50 players in the Official World Golf Rankings are in the field, but Tiger Woods (back) and Paul Casey (withdrew) will not play. There is no cut in WGC events.

A last-minute switch in December due to the pandemic moved the PGA Tour World Golf Championships-Mexico Championship to Concession. The tournament will be broadcast in 120 countries and 800 million households worldwide.

The World Golf Championships began in 1999. The WGC concept was introduced to create a larger group of golf tournaments with a high global profile by bringing the leading golfers from different tours together on a more regular basis, rather than just for the major championships.

A field of 81 players are currently qualified to play at The Concession Club with the final roster determined shortly before the event. A huge purse of $10.5 million will award the winner $1.82 million.

Dustin Johnson opened as the favorite at top US sportsbooks like FanDuel. FD had Johnson at +600 Monday morning, with Jon Rahm coming in at +850 and Xander Schauffele at +1400.

View odds for all of the golfers in the WGC Workday Championships at FanDuel Sportsbook and PointsBet.

All players in the top 50 of the world golf rankings as of Feb. 15 are eligible for the first WGC event. SMU’s Bryson DeChambeau won the NCAA individual championships when it was held at The Concession Golf Club in 2015. He shot an 8-under 280 over four rounds.

Top players in the field include:

Players in the top 50 of the world golf rankings as of Feb. 22 will be included in the field, along with the top 10 in the current FedExCup standings. That will include Sam Burns if he holds on to the lead and wins the Genesis Invitational.

Top 20 players from 2020 Race to Dubai Ranking are in the field, along with eight other top players representing four tours – Japan, Australasian, Sunshine and Asian PGA Tour.

There are eight golfers priced below 20/1 to win, and we’ll identify other Golfers to Watch at much longer odds that could breakthrough with a big win and huge payday. A top 5, 10 or 20 finish is a solid return on these players.

Sungjae Im (+4000): Sungjae Im has to be one to watch as he’s finished top 5 in 4-of-6 events he’s played in Florida. His SG: Short Game and Putting are strengths, and his Ball Striking is top 25 in this field over his last 24 rounds. Tyrrell Hatton (+2200) is up to No. 5 in the world golf rankings and just won European Tour golfer of the month in January. He won the Abu Dhabi HSBC Championship, and recall last year he won Arnie’s tournament at Bay Hill, which started his impressive rise up the world rankings with his exceptional play and results.

Collin Morikawa (+4500 DraftKings): Morikawa’s recent form and results are not as strong, but his game in key stats seems to stack up at The Concession. In his last 24 rounds on the PGA Tour, Morikawa ranks No. 1 in SG: Ball Striking and No. 2 in Approach in this field. He played poorly and nearly finished last in the Dubai Desert Classic last month, but the PGA Championship winner has the iron game and approach play to be competitive over four rounds.

Tommy Fleetwood (+5500 DraftKings): Fleetwood makes his 2021 debut on the PGA Tour and finished Top 20 in Dubai the end of January. He was 1-shot off the lead into the weekend before falling back, and recall he finished Top 20 in November’s Masters on similar heavily undulating greens. Tommy’s Ball Striking remains solid and his Short Game and Around the Green stats are even stronger. Consider his strong skills playing in Florida which has seen him rank top 5 in SG: Total and Tee-to-Green over the last 5 years and Fleetwood becomes a player to include this week for a high finish.

Harris English (+5500 DraftKings): English has been a top performer on tour since last fall with 5 top 10 finishes including a win at the Tournament of Champions event to open 2021. English is currently No. 5 in the season’s FedExCup standings. His stats are solid across the board over his last 24 rounds with top-20 rankings in SG: Total, Ball Striking, Approach, Short Game, Around the Green and Putting. That despite a pair of recent missed cuts. A solid Tee-to-Green game completes the profile of a golfer to support at these odds.

Will Zalatoris (+7000 DraftKings): This rising young star has the game to play with the best and his results on tour have proven it thus far. Four top 10 finishes in 10 starts since last year’s U.S. Open. Three other top 20 finishes including last week at Riviera. With no advantage for course history to players this week, Zalatoris can put his Ball Striking and Approach play skills on display. Oh, and his Driving distance is among the best on tour already. His Putting and Short Game remain a weakness statistically, but not poor and it will improve. Clearly Will is worth it at this price as he continues to perform and produce top finishes.

Marc Leishman (+12500 DraftKings): Leishman has a solid track record in Florida including 2nd last year at Bay Hill. His Approach stats rank top 5 in this field over his last 24 rounds. While his Driving distance likely hinders him at The Concession, his top 20 numbers in Ball Striking and Tee-to-Green keep him competitive. Add in proven putting on Bermuda greens, and Leishman is an overlay for certain compared to many other golfers half his price.

Concession opened in 2006 and was designed by Jack Nicklaus in collaboration with Tony Jacklin. The course was named after the concession Nicklaus gave Tony Jacklin on the 18th hole of the heated 1969 Ryder Cup.

Concession is a true shot makers course. Precision and placement is the only way to solve the gem, with tricky green complexes demanding shot making and accuracy on approach. The fairways are fairly generous, and the greens roll fast and true with plenty of sand bunkers as additional hazards. The nature-rich design is full of thought-provoking strategic challenges winding around wetlands with water in play on several of the holes.

Concession is a very private facility and a difficult course with a maximum 155 slope rating from the championship tees. Towering pines and majestic oaks hang over natural growing foliage and pristine conditioned turf and grasses.

The signature hole is a short risk/reward Par 4 at No. 8. A late dogleg to the right includes a water feature that carves into the front of the green.

There is no strokes gained data as the course is a first-time event on the PGA Tour.

Former PGA Tour player and current NBC golf analyst Paul Azinger lives in Bradenton, Florida and is a member of Concession. He says the course is difficult to shoot a low score, and “it’s the kind of a golf course that will eat your lunch.” 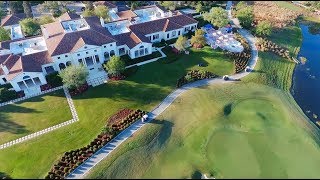