We are limping into 2022 Valspar Championship odds on a short week after the weather-prolonged PLAYERS Championship pushed to a Monday finish. I use the term “we” because while many of the game’s best were beaten and battered by 40MPH winds and frigid rain, I am also on the other side of a long bachelor party weekend in Scottsdale. It’s times like these I’m grateful to have an editor (and I apologize in advance for the undertaking ahead).

Scroll to the bottom for complete outright odds and to compare prices across legal U.S. sportsbooks in your state.

As of this writing, there are 15 players in the field in the top-30 OWGR rankings. That list is highlighted by World no. 2 Collin Morikawa as well as Viktor Hovland, Xander Schauffele, Justin Thomas, and Dustin Johnson to represent the top-10 players in world.

Sam Burns is back to defend his title this year. While this is a Bermuda course, it’s not the typical set-up you would think of for Burns to excel on, given the number of forced layups that mitigate distance and OTT advantage. He still managed to gain strokes across all four major SG categories, but relied on his putter to seal the win, gaining over 9 strokes on the greens. In three career appearances at the Valspar Championship, Burns has never gained less than six strokes putting.

Innisbrook is a bit of a hidden gem on the Florida swing, often overshadowed by Bay Hill and TPC Sawgrass, which have always attracted stronger fields. This year, at least for now, the Valspar is set to attract one of its strongest fields yet in the week prior to the WGC Match Play in Austin. It takes patience and a strong all-around game to compete at this event.

Innisbrook Resort (Copperhead) is a treelined, positional golf course that forces many layups off-the-tee and asks players to work the ball in both directions. It’s a shot-maker’s course with some significant elevation changes that will open the playing field to bombers and short plotters alike.

It’s one of the most difficult courses on TOUR to gain strokes off-the-tee at, as the fairways are narrow and difficult to hold, even when laying up with less than driver. Innisbrook yields below-average ranks in both driving accuracy and driving distance.

Only twice since 2013 has the winning score pushed lower than -10. With all the rain Florida’s received over the last week, I’d expect a softer course to yield a winning score in the low-teens, similar to what we saw in Sam Burns’ 2021 victory. This event has historically mitigated advantage off-the-tee and favored the top players in Approach, Scrambling, and Par-5 Scoring. Here’s a full look at everything to expect from the 2022 Valspar Championship.

Four weeks until the 2022 Masters

Looking at the hole-by-hole breakdown, Innisbrook is unique in that it features a bonus of five Par3s to go along with four Par 5s and nine Par 4s. The Par 3s are all challenging, with all five averaging over-par. So despite the extra Par 3, it will be difficult to gain an advantage with Par-3 scoring, as most players will simply look to make Par and move on.

Given the difficulty around this course, it has always been crucial to capitalize on the Par 5s, with a very strong correlation between par-5 Scoring and success at this event over the years. The top-10 players in Par-5 Scoring entering this week are Matt Fitzpatrick, Sam Ryder, Lanto Griffin, Dustin Johnson, Maverick McNealy, Martin Laird, Cameron Percy, Gary Woodland, Pat Perez, and Doug Ghim.

With OTT advantage being mitigated here, there is an added premium on SG: APP and Scrambling. Players who excel in both categories should set up well for success. Similar to what we saw last week at TPC Sawgrass, the greens will feature an over-seeded blend of Bermuda and Poa. This should react differently from pure Florida Bermuda greens, so I’ll be looking more broadly at total recent putting in my modeling this week.

There is not a huge course history edge this week, but we have seen the experienced veterans with prior appearances at this course go on to find more success than debutants.

There are nine players who have made it through the cut in each appearance over the last five years with a minimum of three starts: Casey, Burns, Haas, Brandt Snedeker, Matt Kuchar, Zach Johnson, and Kyle Stanley.

Despite having never won at Innisbrook, Bubba Watson is the leader in this field in terms of total strokes gained at this tournament. That’s saying a lot in a field that features two-time winner Paul Casey.

Watson has two top 5s and a T13 in six career appearances at this event. The contoured angles at Innisbrook call for similar shot-making to what is needed at Riviera and TPC River Highlands, where Bubba has dominated over the years. There is also a notable correlation to Augusta with players like Bubba, Schwartzel, Spieth, and Zach Johnson finding success at both tracks.

This is not a Pete Dye course, but it does bare similarities to some of Dye’s most famous positional courses like TPC River Highlands, Harbour Town, and TPC Sawgrass. Each of these courses mitigate any advantage from driving distance and force strategic shots with driver or less off the tee.

TPC Southwind, Riviera CC, Colonial CC, and Pebble Beach GL also share the same exposure to higher winds on courses that have hosted a mix of champions who are long and short hitters alike.

As previously mentioned, Par-5 Scoring has told the most consistent story in terms of winning trends. Players who take advantage of those four scoring opportunities and can escape with Par on the remaining Par 3s and Par 4s should position themselves well to contend this week.

This is one of the most crucial courses on TOUR for SG: APP, with many drives funneled to the same layup areas and several elevation changes to navigate. The top-10 players SG: APP entering this week are Paul Casey, Luke Donald, Viktor Hovland, Justin Thomas, Russell Knox, Collin Morikawa, Cameron Percy, Shane Lowry, Mito Pereira, and Joseph Bramlett.

Looking at the stat correlations this week for Innisbrook, there are some notable shifts compared to TOUR average. Here, P4: 450-500, Par-3 Scoring, and SG: OTT each fall outside the top 10. Instead, Par-5 Scoring, SG: APP, and Good Drives Gained  make the most notable jumps in importance. Just outside the top 10, we also see notable jumps this week in the importance of P5: 600-650, Fairways Gained, and SG: ARG. 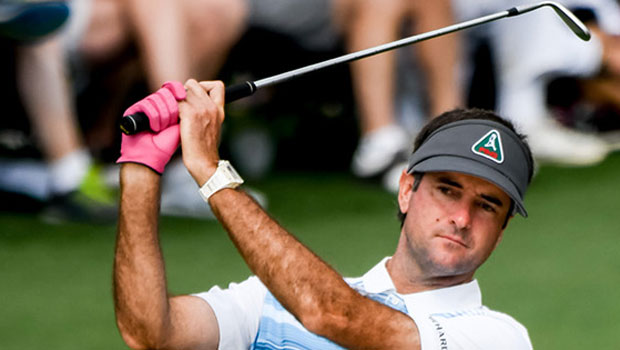 We all know by now that there are certain Bubba tracks that he should be expected to contend at year over year. That list is highlighted by Riviera CC, TPC River Highlands, and Augusta National. This week, it’s possible we could expect a drift on Bubba Watson, despite him being the No. 1 overall player in Innisbrook Resort (Copperhead) Course History. He’s finished T4 and T13 in each of his last two appearances at this event, and seems about due to pick up his first win since the Travelers in June of 2018.

It’s been a slow start to 2022 for Bubba, mainly by his own choice as he’s played just three PGA TOUR events since last August. Despite that rust, he’s shown some promise already with a T14 at the WM Phoenix Open. He also could have been a winner at the Saudi International in February had it not been for Harold Varner’s miracle 100-foot walk-off putt on 18.

Looking ahead to Valspar, I’m encouraged by Bubba’s performance on these greens historically, as he ranks 20th SG: P at this event. In addition to the stellar course history, Bubba also rates out top 20 in both Par-5 Scoring and Good Drives Gained, which should continue to bode well for him at the Valspar Championship.

WHAT TO WATCH FOR AT THE 2022 VALSPAR CHAMPIONSHIP

The biggest storyline going into the Valspar is how the game’s best players will recover from a short and arduous week after THE PLAYERS. It sets up to be a great field, and I’m excited to see some of the top names take on this course for the first time in a long time.

With all the course-fit profiles in mind, I’m leaning early towards the below player pool. Naturally, I’m looking their way in the 2022 Valspar Championship odds as well. I’ve broken the list down by actualized pricing/odds tier for DraftKings.

As of Tuesday morning, Paul Casey, Doug Ghim and Sebastián Muñoz are WDs.