The NFL playoffs open with Wild Card Weekend games this Saturday and Sunday. TheLines will provide betting breakdowns and analysis for every game throughout the playoffs. We’ll look at the odds and see why they’re moving a certain way, along with breaking down the matchup and providing the best sportsbook promotions for Wild Card Weekend.

In the AFC, the Tennessee Titans (9-7) are No. 6 seed and travel to Foxborough to play the No. 3 seed New England Patriots (12-4). The Patriots opened as 4.5-point favorites on DraftKings Sportsbook. Kickoff is scheduled for 8:15 ET from Gillette Stadium on Saturday, Jan. 4.

Tennessee and New England have met in the playoffs twice with the Patriots winning both AFC divisional round games in 2003 and 2018 in Foxboro. In 2018, the Patriots handed the Texans a 35-14 defeat.

New England opened as a 4.5-point favorite but the number has moved in New England’s favor during the week.

The coaching match-up is an interesting one, as Titans head coach Mike Vrabel played with the Patriots under Bill Belichick from 2001-2008 and won three Super Bowl rings. Familiarity with the Patriots system must be worth something, as Belichick’s coaching tree has handed the Patriots four of their last nine losses over the last two years including Week 17 when the Dolphins and coach Brian Flores pulled off the shocking upset of the season with a 27-24 win as a 17-point underdog. That knocked the Patriots out of a top-2 seed and first-round bye.

Now the Patriots enter the playoffs without a bye for the first time since the 2009 season when the Ravens running game pounded the Patriots in a 33-14 win.

The Titans and Patriots both averaged 355 yards per game on offense this season to rank No. 15 in the league. But Tennessee has one of the better rushing attacks in the league at 4.9 yards per gain led by the league’s top rusher, Derrick Henry (1,540 yards, 16 TD’s). Over the Titans’ last six games they have averaged 183 rushing yards per game with Henry rushing for 211 yards and three touchdowns in the playoff-clinching Week 17 victory at Houston.

After starting the season 8-0, New England finished 4-4 the second half losing to AFC playoff teams Baltimore, Kansas City and Houston, and barely holding on to beat Buffalo in Week 16. The Patriots offense failed to score more than 24 points in all but one of those eight games and that was against the Cincinnati Bengals league-worst defense that allowed 400 yards per game and 6.1 yards per play.

The Titans won five of their final seven games as QB Ryan Tannehill directed the offense starting in Week 7. He averaged 231 passing yards per game with 20 touchdown passes and an outstanding 9.6 yards per pass. He ranks No. 12 in Football Outsiders’ QBR. Over the final seven games, the Titans offense averaged 33 points per game, scoring at least 28 points in six of the seven contests. Tannehill, however, will now face the league’s No. 1 pass defense as ranked by Football Outsiders.

The Patriots offense is hampered with leading receiver Julian Edelman plagued by nagging shoulder and knee injuries. Edelman (1,091 yards, 97 receptions) was limited to just three catches for 26 yards in the season-ending defeat to Miami. Quarterback Tom Brady ranks No. 17 in QBR and is limited with receivers as the next top target is running back James White (69/612).

The Titans are hampered a bit at cornerback with Adoree’ Jackson (foot) out since Week 13 and Malcolm Butler on injured reserve. The safety position is solid, however, with Kevin Byard and Kenny Vaccaro leading the Titans secondary.

The Titans rank No. 20 in DVOA pass defense, but with the Edelman not at full health, New England will likely rely on the short passing game and more rushing with Sony Michel, who has at least 18 rushes in each of the last three games. The Titans (No. 7) and Patriots (No. 6) are both solid in DVOA rush defense. But the Patriots average just 3.7 yards per rush and run the ball 40% of their plays to the Titans 4.9 yards per rush with 45% of their offensive plays via the run.

Both the Titans and Patriots went 8-7-1 ATS this season, but New England struggled down the stretch covering just two of their final six contests while failing to cover against four AFC playoff teams in the second half of the season. Tennessee went 5-3 SU on the road and 3-3 ATS as an underdog this season.

The Patriots were outgained by two of the worst teams and defenses in the league in the last three weeks. Both the Bengals and then the Dolphins held the Patriots offense under 355 yards, as the invincible Patriots team of the first half of the season looked more vulnerable over the second half with a sputtering offense.

Despite the Patriots’ recent struggles entering the playoffs, New England is still 19-2 SU in its last 21 home games. In addition, the Patriots have won nine straight home playoff games since 2013, scoring at least 24 points in each contest.

Watch below for betting picks and predictions for Titans and Patriots, including our thoughts on the spread, moneyline, total, and props for the game. 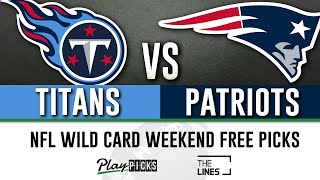