There are big upsets almost every year at the NCAA tournament, but when it comes to betting on March Madness and point spreads, which Cinderellas pulled the biggest upsets of all?

There have been more than 60 double-digit point-spread upsets since 1985. Below are the three largest since the tournament expanded.

The 2012 NCAA tournament saw the biggest point-spread upset in tournament history when the 15-seed Spartans took down the second-seeded Tigers in the first round. The closing line at most sportsbooks was Missouri -21.5.

Kyle O’Quinn led the Spartans that year, putting up 26 points and 14 rebounds. Despite O’Quinn’s impressive performance, the Tigers still had a chance to win the game in the final few seconds.

Tigers’ guard Phil Pressey took a shot at a game-winning three-pointer just as the buzzer sounded. Pressey’s attempt careened off of the rim and millions of brackets were busted before they even got started.

O’Quinn made a name for himself in Norfolk State’s 86-84 victory over the Missouri Tigers, going on to be a second-round draft pick in the NBA.

It is still Norfolk State’s only tournament appearance to date.

While that upset was shocking, it wasn’t the only big upset of the day. No. 15 Lehigh defeated No. 2 Duke as well, as a 12-point dog. 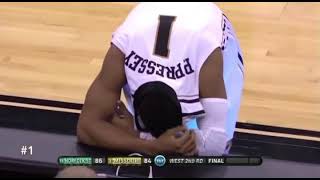 It’s no surprise this game made the list. It is the only time in NCAA tournament history that a No. 16 seed upset a No. 1 seed. When it comes to the point spread, though, it takes second place among March Madness upsets.

Heading into the tournament, the line at most sportsbooks was Virginia -20.5.  Nobody expected UMBC to even keep this thing close, but they did more than just that.

The Retrievers went on the beat the Cavaliers by 20 points, winning the game 74-54.

The game was tied at halftime, but the Retrievers outscored Virginia 53-33 in the second half.  No team scored on Virginia like that the entire season. Up to that point, opponents averaged 53 points per game against the Cavaliers.

UMBC scored that just in the second half.

It’s one of those games that everyone remembers where they were when they watched it happen. 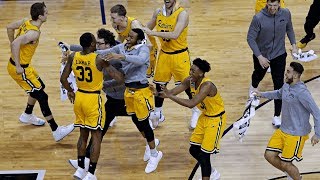 The 15-seed Santa Clara Broncos became the first team to record a 20-point upset in the 64-team era when they defeated the 2-seed Arizona Wildcats. Santa Clara had one starter returning from the year before and a roster full of freshmen.

Things weren’t looking great for the Broncos in the second half. At one point, they trailed the Wildcats by 13 points. But Arizona didn’t really help themselves by shooting at just 25% in the second half of the game.

On this day, Santa Clara guard Steve Nash etched his name into March Madness upsets lore, leading the team through a magical WCC tourney run en route to March Madness. But it wasn’t Nash who was the star in this game. Pete Eisenrich put up 19 points in the game to fuel the upset victory over the Wildcats. The Broncos became the second 15-seed to win an NCAA tournament game. 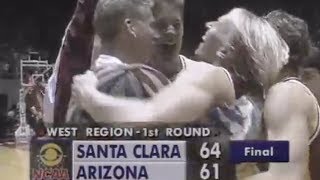