“I came, I Sawgrass, I Conquered” is the Instagram caption I went with after completing 18 holes at TPC Sawgrass’ Stadium Course this past November. It underwhelmed on likes. But I’m not afraid to go right back to it if the ensuing research helps us land a winner at THE PLAYERS Championship. We’ll go over the odds and key info for THE PLAYERS Championship in our weekly preview.

I’ll see what an 8-handicap’s first-hand experience can tell us about the fifth major beyond the stats.

Last year, I partook in the community win of Justin Thomas at odds north of 20-to-1. Thomas put forth a Herculean weekend comeback with -12 the final two days.

TPC Sawgrass features water hazards on 17 holes, and Pete Dye’s most famous design will bait players into taking these hazards on. The constant threat of hazards has resulted in incredibly volatile leaderboards over the years. Thirteen of the top-20 players in SG: TOT over the last 36 rounds have a MC at this event within the last three years alone. With that in mind, it’s a good idea to diversify exposure and identify low-owned pivot plays for DFS, this week more than ever.

Here’s a full look at everything to expect from the 2022 THE PLAYERS Championship.

Scroll to the bottom of this article to compare full outright odds across legal U.S. sportsbooks.

It’s called THE PLAYERS for a reason — this field boasts the best of the best. This event had the fourth-highest strength of field in 2021 behind the PGA Championship, US Open and Open Championship. This year looks no different. The only top-100 players not scheduled to play are the injured Tiger Woods, Harris English and Steve Stricker, as well as Phil Mickelson. He’s healthy but recovering from pride, ego or maybe something else entirely.

Tiger Woods and Davis Love III are the only repeat winners at THE PLAYERS over the last 30 years, further evidence of its volatility.

Much like the other Pete Dye designs we see on TOUR,  TPC Sawgrass is a positional course. It mitigates the advantage of longer hitters and rewards players with elite approach and short game.

Once remnant swamp land, the foundational property for TPC Sawgrass was purchased in the 1970s for $1. The goal was transforming it into a state-of-the-art tournament golf course to host THE PLAYERS Championship (I am transcribing from what my tour guide told me). Today, we see a modern marvel and the quintessential tournament stadium course with some of the most pristine manicuring in golf.

The stakes don’t get much higher than a purse of $20 million (top prize $3.6 million) in one of the toughest fields with an electric crowd. At par 72 sitting just under 7,200 yards, TPC Sawgrass rewards four days of well-rounded play. We’ve seen bombers like Rory McIlroy and Jason Day win as often as shorter specialists like Si Woo Kim, Matt Kuchar and Webb Simpson.

Looking at the hole-by-hole breakdown, there are five par 4s funneled to the 450-500 range, which is fairly standard on TOUR. In contrast to the Arnold Palmer Invitational which hosts the longest par-3 average on TOUR, the par 3s this week average some of the shortest lengths on TOUR. There is a fairly balanced distribution of approach shots from 100-250 yards compared to the PGA TOUR baseline.

So, I’ll look more closely at holistic SG: APP stats when modeling for this week. In general, the ability to gain strokes on approach and around the green is more difficult than average here. Players who excel in both categories should set up well for success.

With water hazards on 17 holes, players must keep the ball in play and avoid double-or-worse. This event has been top five in most penalty strokes taken in each of the last five years.

The greens have seen a significant shift since the tournament moved from May to March in 2017. Due to the earlier, colder season, the Bermuda grass has needed to be overseeded with Poa and Bentgrass, a similar mix to what we see at the Valspar, AmEx and WMPO. That contrasts with the rest of the Florida Swing. We must monitor how typical Bermuda specialists have fared on these new greens since 2017.

I played in severely different conditions than what the pros will see this week (e.g. not from the tips or in front of crowds of thousands). But, in a week where we are trying to use as much information as possible, I’ll share some highlights and learnings from my trip in November. Here are the main thoughts I had from my time on the course (live tweet thread here).

Highlights of My Round

Lowlights of My Round

What I Learned About TPC Sawgrass

You’ll be hard pressed to land on any one player with conviction here. Bryson DeChambeau, Jon Rahm and Brian Harman are the only players in the field who’ve finished inside the top 20 in each of the last two PLAYERS Championships.  Stars like Rory McIlroy, Hideki Matsuyama, Xander Schauffele, Shane Lowry, Tommy Fleetwood and Paul Casey each have as many MCs as T10s at this event over the last three years.

Although elite names like Thomas, McIlroy, Day and Woods have shined, just as many unheralded players have authored top-five finishes. Jim Furyk, Jhonattan Vegas, Eddie Pepperell, Brandt Snedeker, Jimmy Walker, Jason Dufner, Kyle Stanley, Kevin Chappell, Colt Knost, and Ken Duke each have T5 finishes dating back to 2016. We should expect to see some parity on the leaderboard come Sunday.

The 2004 PLAYERS champion has not let off much steam on these grounds since. Although Scott profiles best on longer, bomber tracks like Bay Hill, Riviera, and Torrey Pines, there’s something about TPC Sawgrass that seems help him. He has made it through the cut a perfect nine out of nine times over the last decade. He has finished T12 or better in four of his last five appearances. Playing a 2-wood in place of his driver at the API turned some heads, but perhaps he was just tuning up for the positional play at TPC Sawgrass.

Others Excelling At THE PLAYERS

Unpacking those Dye courses, Harbour Town, Stadium Course and TPC River Highlands most closely resemble the layouts and design at TPC Sawgrass. They have produced overlapping leaderboards over the years of players who are accurate off the tee, possess strong irons and show crafty around-the-green play.

Aside from these other Dye courses, I’m also looking closely at Sedgefield CC and Innisbrook (Copperhead) as other Bermuda courses which favor a similar profile. TPC Scottsdale also features a similar assortment of risk-reward holes with abundant hazards. It has seen consistent success in recent years from players like Simpson, Matsuyama, Thomas, Kuchar and Fowler.

The top-10 players in SG: TOT across each of these comp courses are Simpson, Ancer, Cantlay, Scott, Kim, Rahm, Johnson, Thomas, Harman and DeChambeau.

As per usual with Pete Dye courses, distance is simply nice to have at TPC Sawgrass, with many of the par 4s requiring forced layups with less than driver. With that in mind, I’m not looking too closely at the Driving Accuracy. The field should be inherently more accurate with other clubs in hand.

I’m also interested in players who can capitalize on drivable par 4s, as the 300-yard par-4 12th will yield birdies for more than 25% of the field who take it on. The top 10 in Short Par-4 Scoring are DeChambeau, Russell Henley, Wyndham Clark, Justin Thomas, Brian Harman, Jason Day, Peter Malnati, Cam Smith and Matt Kuchar.

While THE PLAYERS has bred a diverse cast of winning profiles over the years, the common through line seems to be “fairway to green” as the best Approach and Around-The-Green stockpile wins. With the medley of grass types on these over-seeded greens and number of forced layups off the tee to mitigate the need to hit drivers on most par 4s, I’m emphasizing the best iron and wedge players.

Looking at the stat correlations this week for TPC Sawgrass, there are some notable shifts compared to TOUR average. Here, P4: 450-500, Par-5 Scoring, and Par-3 Scoring each fall outside the top 10. Instead, Good Drives Gained and total Par-4 Scoring make the most notable jumps in importance. Just outside the top 10, we also see notable jumps this week in the importance of SG: P 15-20 ft and SG: ARG. Meanwhile, Sand Saves Gained and Prox 200+ drop in importance. 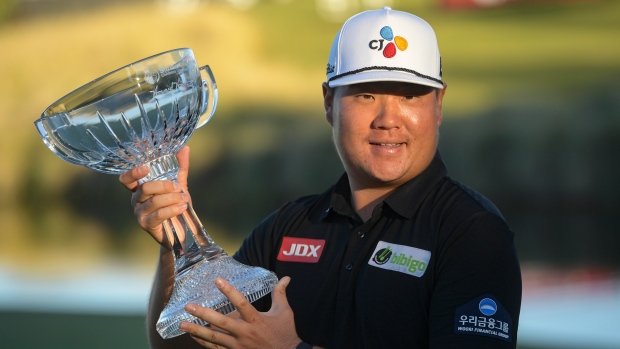 I don’t always do a great job of restraining myself from the temptation of ever-present golf futures. But, since odds for THE PLAYERS hit the board several weeks ago, I’ve locked in on just one name: Mr. Sungjae Im.

Here’s a fun fact to kick things off. Only two players at the 2021 PLAYERS Championship registered multiple rounds of 66 or better: the winner, Justin Thomas and the T17 finisher, Im. A couple of wayward water balls on Saturday hijacked Im’s tournament as he shot 77 in his third round. But, when I look back at a player’s course history, I’m encouraged whenever I see a ceiling of multiple low rounds on the same course.

TPC Sawgrass requires a strong all-around game to contend and emphasizes control off the tee, top-tier ball striking, and more often than not, an elite short game. Over the last 36 rounds, no one else in this field rates out top 25 in SG: Ball Striking, Driving Accuracy, and SG: Short Game.

It’s no secret Im thrives in Florida. No other player has gained more total strokes across the Florida Swing since 2020. That span includes a win and T8 at the Honda and five additional top 30s across THE PLAYERS, API, Valspar and WGC-Workday.

With a win and six top-20 finishes over his last nine events, it’s not Im-possible to envision Sungjae joining his country-mate Si Woo Kim in Sawgrass’ locker room of champions.

WHAT TO WATCH FOR AT THE 2022 PLAYERS CHAMPIONSHIP

There is a lot to watch at THE PLAYERS, literally. The new PLAYERS app will allow us to track video of every single shot from every single player, akin to what we see at the majors. That definitely adds a layer of excitement to an already star-studded event, while slashing any hope of productivity in the latter half of the work week. For better or worse, I’ll probably be glued to my phone from Thursday to Sunday.

Then, back to old Shot Tracer in the PGA TOUR App for the Valspar.

With all the course-fit profiles in mind and DFS pricing and odds already released, I’m leaning early towards the below player pool. Naturally, I’m looking their way in the 2022 PLAYERS Championship odds as well. I’ve broken the list down by actualized pricing/odds tier for DraftKings.