The 2018 Open Championship at Carnoustie tees off Thursday.

Listed at +1,600, Rickie Fowler is among a group that is second favorite overall (behind Dustin Johnson at +1,200).

Rickie Fowler is consistently among the top wagered golfers to win championship events.

Close only counts in horseshoes and hand-grenades

The Ringer examines this Fowler-betting phenomenon. There are a number of potential factors as to why people love them some Rickie: he’s been consistently near the top of the leaderboard; he’s young; he’s likable; he’s due.

According to the Westgate’s Jeff Sherman, the Fowler Phenomenon™ is far from unprecedented. While he claims that Fowler was bet heavy as soon as he joined the Tour, it’s not uncommon for the public to wager on “the new guy”:

“A lot of people like to pick the golfer that is supposedly the best golfer that hasn’t won a major yet. We saw a lot of that with Sergio García over the years, and now Rickie Fowler kind of has that title.”

Essentially, it’s a psychological thing. It’s a fun bet, but also not necessarily a bad bet.

While not discussed in the article, Fowler briefly resided in Las Vegas, giving him at least some “local favorite” appeal for sportsbooks in the city as well.

Will the public be rewarded this time?

According to The Ringer, the course at Carnoustie is similar to ones that Fowler has performed well at in the past, like Gullane.

Enough about Fowler, all we care about is Tiger 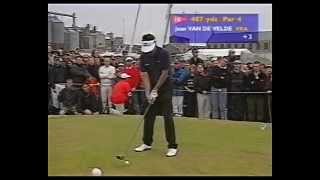