The quarterfinal round for Euros will begin Friday with a match-up of two teams who survived the most entertaining games we’ve seen in this tournament. Spain let Croatia back in from a 3-1 deficit but won 5-3 in extra time. Switzerland went down 3-1 to France but tallied twice in regulation before advancing in penalty kicks. Despite each playing dramatic Round of 16 matches, Spain Vs Switzerland odds are lopsided.

Path To The Quarterfinals

Two veteran squads will have to recover in just three days and try to retain some of that adrenaline from their wins on Monday. However, the victories put them on fairly even terms, with both sides playing over 120 minutes of intense soccer, defeating both participants of the 2018 World Cup Final.

Perhaps these wins can propel a couple squads who only managed one win each during group play. Spain will need its offense to keep going, as the five goals in the Round of 16 was one less than their output from the three group matches. Switzerland appears to be improving with each match, having won both games since their 3-0 defeat to Italy on Matchday 2.

Here are the prices for Friday’s game, which will kick off at noon ET on ESPN. The moneylines are for full-time (90 minutes plus stoppage time) results. They do not include Extra Time or PK results.

With France getting knocked in by Switzerland, it’s Spain that is now the favorite in Euro 2020 outrights. With that, they are clear favorites in this quarterfinal matchup.

Despite both teams having shown offensive capabilities against the last World Cup finalists, another six-goal bonanza in regulation seems implausible.

For Spain, the go-ahead goal provided by Alvaro Morata might be the spark he needs to attack goal more confidently. If he can find his scoring touch, Spain can make a run at winning three of the last four Euro championships. 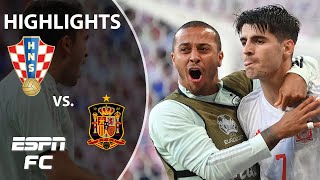 Switzerland’s depth stepped up in getting an early lead and then coming back against World Cup holders France. After opening scoring in the must-win group stage finale against Turkey, Haris Seferovic staked the Swiss to a lead they took into halftime. Two goals in the final ten minutes, one by Seferovic and the equalizer by Mario Gavranovic, gives the opposition other names to watch besides Shaqiri and Xhaka.

Yes, this isn’t the same Spanish squad that won three major tournaments (two Euros and a World Cup) in five years. However, this has a chance to open the quarterfinal round with some exciting play and dangerous counter attacks. Should be a good appetizer to the Final-quality second game on the slate Friday between Italy and Belgium.