As the experimenting in baseball has now grown to include deciding ties with home run derbies, one thing remains constant: the power of Rob Manfred comments to make everyone scratch their heads. The latest collection of words out of the mouth of MLB’s commissioner meshes the pace of the game, NBA Commissioner Adam Silver and sports betting into one glorious cluster.

Manfred shared Silver’s opinion that the pace of the game is good for baseball. Silver’s rationale was betting on MLB. The implications of that simple sentence are probably not something MLB owners want to think about too much.

While Silver might not be the most qualified person to comment on MLB’s business, he does have some clout in this context. Silver’s tenure as the NBA’s commish during the expansion of legal sports betting around the country attributes some ethos to him here.

So, what exactly did Manfred say? The reason for that is lag and ‘sidelining’. Sidelining is the advantage that spectators who are physically at sporting events have over other bettors. Lag is the culprit for bettors who aren’t watching games in person. It takes time for systems to record and transmit data, then update betting markets.

The seconds between pitches do a great deal to diminish sidelining. They also decrease the instances of bettors not being able to get their in-game bets in before the next pitch takes place. Thus, it’s simple logic. A better product means more bettors are likely to be interested. That, in turn, drives interest in MLB games.

So, now that Manfred seemingly understands that baseball’s current pace has some upside to it, will that lead to MLB checking its swing on further alterations? It’s hard to tell. That isn’t the only issue these comments bring up, either.

Did baseball really need Silver to point this out?

It’s possible that Manfred already understood this concept prior to him sharing Silver’s advice. Manfred might have simply been dropping Silver’s name to give some oomph to his point or throw in an interesting anecdote. There might have also just been an element of, “I talk to the NBA commissioner so you should think I’m cool.”

Another possibility is that Silver was actually the first one to point out the value of baseball’s current pace to Manfred. If that’s the case, it’s cause for Manfred’s bosses to raise their eyebrows. On top of Manfred not coming to this conclusion on his own, that would also mean no one in the league office that Manfred works with got there, either.

For a component of the business that is only going to be more integral as time goes forward, that’s a red flag. It’s crucial that MLB understand every possible effect that sports betting could have on its products.

If that wasn’t the case and this is something that Manfred – or someone else in the league’s executive suite – has a solid grip on, then there is still a concern here. Manfred’s comments don’t reveal who should be the most worried, though.

Which way is Manfred leaning on further game changes?

Manfred has spoken a lot about what he sees as MLB’s need to speed up the game to attract and retain fans. Thus far, attempts to do that have failed. Those have included three-batter minimums for pitchers and allowing teams to intentionally walk an opposing batter without throwing four pitches.

Because of that ineffectiveness, fear of the unknown comes into play in this situation. Bettors and fans don’t know how Manfred and others in positions of power in MLB feel about the value of in-game wagering.

It’s possible that in a show of bravado and dogged determination to chase whatever demographic Manfred and others are convinced they’ll land by significantly altering the game so that a nearly four-hour contest doesn’t have a grand total of 11 minutes of actual action, MLB might essentially ruin the product for live wagering. Thus, they’d lose a segment of fans that could be more engaged than people who are unlikely to ever place any in-game wagers.

What Manfred decides to do with gambling and the pace of play going forward will be impactful. Bettors and fans should hope that he doesn’t have to call Silver for an explanation. 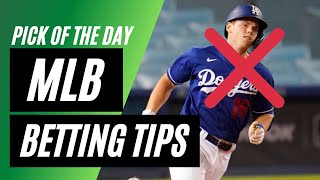