The NFL playoffs continue with the Divisional Round this Saturday and Sunday. TheLines will provide betting breakdowns and analysis for every game throughout the playoffs. We’ll look at the odds and see why they’re moving a certain way, along with breaking down the matchup and providing the best sportsbook promotions for the Divisional Round.

The Tennessee Titans and Baltimore Ravens will face off at M & T Bank Stadium for an AFC Divisional Round game on Saturday night. The game will mark the 24th meeting in a series the Ravens lead, 12-11. This marks the fourth postseason meeting between Tennessee and Baltimore. The most recent regular-season game between the teams unfolded Oct. 14th of the 2018 season, a game the Ravens won by a 21-0 margin. The last postseason contest between the Titans and Ravens unfolded on January 10, 2009, when Baltimore notched a 13-10 win in Tennessee.

The Ravens opened as robust 9.5-point road favorites on FanDuel Sportsbook and 10-point favorites on DraftKings Sportsbook late Saturday night. This, despite the Titans’ impressive upset of the Patriots at Gillette Stadium in the Wild Card game earlier Saturday.

Tennessee is essentially playing with house money at this point, given a defeat of New England at home in the postseason is no small feat. However, this season, a matchup against the Ravens is exponentially more difficult. Four of Baltimore’s seven home victories this season were by more than 10 points.

The projected total opened at 48 points on DraftKings and 48.5 points on FanDuel but dropped to 47 at both sites as of Friday afternoon. The Ravens averaged 29.9 points per home game, while the Titans averaged 25.2 points per road game, which helps explain the total. However, both defenses certainly have more than enough talent to serve as an obstacle. Tennessee allowed the fourth-fewest points per road game (17.6) this season, while Baltimore surrendered just 18.6 points per home contest.

Having just toppled what might soon be considered the “legacy” juggernaut of the AFC in the Patriots in the Wild Card game Saturday night, the Titans now take on their next challenge – the potential new kings of the AFC in the Ravens. Tennessee’s win over New England in the hallowed postseason ground of Gillette Stadium should undoubtedly give them a healthy dose of confidence. So, too, should the way they’ve played overall since Ryan Tannehill took over at quarterback for Marcus Mariota beginning in partway through a Week 6 matchup against the Broncos.

However, on paper, Tennessee is up for its biggest challenge yet. The Ravens were not only the league’s best offense this season, they complemented it on the other side of the ball with one of the league’s premier defenses. Then, they’ll naturally come into this matchup with one-week rest advantage on the Titans. And, it could almost be termed a two-week edge, as many of Baltimore’s key players sat out the Week 17 win over the Steelers.

The Titans will undoubtedly deploy their standard philosophy on offense, one that features NFL rushing champ Derrick Henry as a centerpiece and selective mid-range/downfield shots from Tannehill to the likes of rookie A.J. Brown, Corey Davis and even athletic tight end Jonnu Smith. The matchup for Henry will be a tough one. Yet as he demonstrated against New England, the star back is virtually matchup-proof this season. Henry trampled a Pats defense that had come in tied with the Eagles for fewest rushing yards per home game (77.2) to the tune of 182 yards. The Ravens actually shape up as slightly less imposing. Baltimore yielded 101.2 rushing yards per home contest this past regular season, compared to 85.5 per road game.

Tannehill will face an opportunistic secondary that picked off 12 passes and allowed just 15 passing touchdowns this past regular season. The Ravens also allowed the second-lowest catch rate (58.0 percent) this season, with only the Patriots’ 57.0 percent figure ranking ahead of them. Then, Baltimore ranked in the top 10 in yards after catch allowed (1,718), which is particularly concerning for a player like Brown that enjoyed so much success post-reception this season. Tennessee was a more aggressive passing offense on the road (239.8 passing yards per away contest), although late-season games against the questionable Raiders and Texans secondaries helped facilitate that approach.

Just as Henry is the focal point of his team’s offense, Lamar Jackson certainly holds the same distinction. The frontrunner for league MVP rushed for an NFL-record 1,206 yards and compiled 43 total touchdowns. Of note is the fact Tennesee allowed 251 rushing yards to quarterbacks on just 61 carries. Then, Mark Ingram, the other major component of Baltimore’s ground attack, is expected to overcome his late-season calf injury and suit up. But, the matchup against the Titans for running backs is sub-optimal — Tennessee finished the regular season yielding just 99.4 rushing yards per road tilt.

The matchup in the secondary could be much more appealing, especially if Jackson can get talented rookie Marquise Brown back into the swing of things after a mostly disappointing second half. Tennessee surrendered a 64.6 percent completion rate and 25 passing touchdowns, while also ranking in the bottom half of the league in air yards (5,018) and yards after catch  (1,940) allowed.

The Ravens lead the all-time series with the Titans by a 12-11 margin. Baltimore has three of the past five games in the series, dating back to the aforementioned 2009 AFC Divisional Round game.

Watch below as Matt Brown breaks down his betting picks and predictions for Ravens and Titans, including thoughts on the spread, moneyline, total, and props for the game. 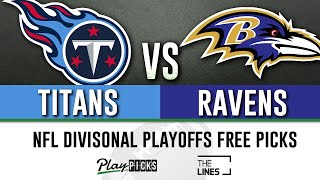