While Raiders At Cowboys is unfolding to wrap up Week 4 in the NFL, TheLines lead betting writer Eli Hershkovich is chatting with sports bettors in our Monday Night Football chat room.

Join the conversation below! Share your thoughts on the game, and what bets you’ve made.

The chat has concluded.

The spread between this highly anticipated battle has had some movement since the open, but bettors are still firmly backing the home squad despite the Raiders’ 3-0 record. The line opened with the Chargers as standard +3 home favorites and then saw the line go as high as +4 early in the week. It is now at Chargers .

The two 2020 contests in this series did finish with very close margins, as the Raiders notched a 5 point win in LA and the Bolts countered with their aforementioned 3 point overtime squeaker of a victory in Las Vegas in December. Four straight games in this series haven been decided by single-digit margins overall.

The total has seen its fair share of movement as well, and even though there’s been some lowering of offensive expectations since the open, this is still projected to be a fairly high-scoring game. The number opened at a hefty 53 points before dipping to 52, and it’s subsequently bounced between 52 and 52.5 for the most part. The game over under is currently set at 51.5.

Recent series history supports a number over 50. Both of last season’s games ended with 57 total points, while one of the 2019 matchups also finished with 50 points exactly. In terms of key offensive players, the Raiders have a chance to get Josh Jacobs back in the fold for this contest from his ankle injury, while the Chargers’ Keenan Allen was limited in practice with his own ankle issue. The Raiders do come in with the most total yards per game through three weeks (471.0), while the Chargers are in the top 10 themselves with 394.7 total yards per contest. 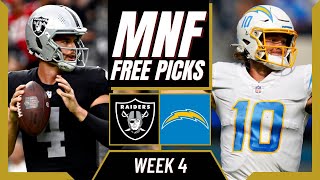