The NFL playoffs move to the Divisional Round this weekend with games on Saturday and Sunday. TheLines will provide daily betting breakdowns and analysis for every game throughout the playoffs. We’ll look at the odds and see why they’re moving a certain way, along with breaking down the matchup and providing the best sportsbook promotions for Divisional Round Weekend.

In the NFC, fifth-seeded Seattle Seahawks will travel to face the second-seeded Green Bay Packers at 6:40 p.m. on Sunday. The Packers opened as 4-point favorites and at -210 on the moneyline.

The Seahawks won the last meeting between these teams, 27-24, in Seattle last November. The Packers won the previous three meetings at Lambeau Field, but Seattle edged Green Bay, 28-22, in OT for the 2015 NFC Championship.

Aaron Rodgers is 10-7 in the postseason since 2010 and 3-2 at Lambeau Field. The Packers are 3-3 in the Divisional Round this decade.

Russell Wilson is 9-5 in the postseason since 2012 and is 3-4 in playoff road games. The Seahawks have lost five straight road games in the Divisional Round, including a 42-20 loss at Green Bay back in 2008.

The Packers opened as 4-point favorites and the spread has oscillated between 3.5 and 4.5 throughout the week, moving back toward Green Bay as of Friday afternoon. Seattle is 11-2 in games decided by one score this season.

Neither defense has been consistent against the run and both of these teams are built around running the football. Seattle posted the fifth-highest run play percentage (47.7%) in road games this season and the Packers are giving up 4.7 YPC at home. Marshawn Lynch couldn’t get anything going against the Eagles elite run defense, but still managed to find the end zone and will certainly have more success in this matchup.

Wilson is posting a 107.2 passer rating with a 12:3 TD:INT ratio on the road this year. While he’s completing 70.46% of his passes on the road, he’s also absorbed 31 sacks in those eight contests. The Packers will look to blitz Wilson with Za’Darius Smith and Preston Smith screaming off the edge, but Green Bay’s defensive line has really struggled to generate pressure with the second-lowest adjusted sack rate (5%) in the NFL this year.

Rodgers has been great at home per usual with a 101.6 passer rating and 14:2 TD:INT ratio. The Packers are averaging 4.7 YPC at Lambeau and Seattle yields 4.7 YPC on the road. However, Seattle’s pass defense has given up just 9 TDs with 14 interceptions on the road this season. The Seahawks front seven is healthy and playing well, but the Packers offensive line is playing well with the sixth-best adjusted sack rate (5.8%) this season.

Granted it came against an injury-depleted Eagles squad that lost QB Carson Wentz, but the Seahawks defense looked fierce and disciplined in the Wild Card round and has strung together six fantastic quarters of playoff-caliber football dating back to Week 17 against San Francisco. In a battle between Hall of Fame QBs, that unit could be the difference.

Watch below as Matt Brown reveals his betting picks and predictions for Eagles at Packers, including thoughts on the spread, moneyline, total, and props for the game. 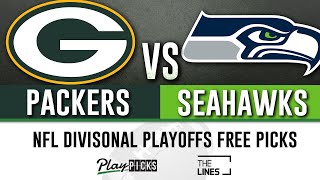