The College Football Playoff is here. No. 2 Ohio State (13-0) and No. 3 Clemson (13-0) field the two most talented rosters in the country in a rematch of the 2016 Fiesta Bowl. Last time, Clemson famously bested the Buckeyes 31–0 and began their dynasty run. Ohio State is out for revenge and Clemson is out to repeat. This might just be the championship before the championship game.

We’ll be taking a look at this semifinal matchup in-depth, complete with a guide on how to bet this game. How has the line moved since opening? How  is the public betting? What matchups will change the course of this game?

Clemson opened as a one-point underdog when the line opened at DraftKings Sportsbook but quickly became a betting favorite, and rightfully so; the defending champions are the most talented third seed the Playoff has fielded yet. Expect this line to close between a two- and three-point spread. It would be a surprise if Ohio State managed to be favored again at any point.

The Buckeyes straight up are an enticing bet against Clemson, with the moneyline remaining unmoved since opening. This should be a well-balanced game with some explosive offensive plays and shows of defensive prowess, with playmakers at every position. The over/under sits at 63, with an implied score of 32.5–30.5 in favor of Clemson. Ohio State has been held under 30 once, Clemson has been held under 30 twice; albeit, neither team has faced a team with quite the defensive talent as the other.

Ohio State vs. Clemson by the numbers

As mentioned, both of these teams score in heaps: Ohio State (48.7 ppg) sits first in the nation in scoring offense and Clemson (46.5 ppg) ranks fourth. The Buckeyes threw for touchdowns on an incredible 13% of all pass attempts this season, by far the best in the nation (for teams having attempted 300 or more passes, second: Oklahoma, 10.3%). However, Clemson boasts the top-ranked team passing efficiency defense (92.8), allowing just eight passing touchdowns all season and 50% completion.

Clemson also ranks 22nd in sacks (37) on an Ohio State team that’s allowed 31 sacks this season (94th). The Buckeyes sit third in the nation in sacks (51), but face a Clemson line that has only allowed 13 sacks all season long; the Tigers also rank first in every pass protection metric recorded by Football Outsiders. Ohio State tops the nation in third down conversion rate (57%) and fourth in third down conversions allowed (28.6%), allowing just nine punt returns all season long (9th). In short, when the Buckeyes are on the field, they score often. Clemson, though, is allowing the fewest first downs in the country (12.3 per game).

Many players in this game don’t need introductions. Ohio State’s Justin Fields set a regular season record for touchdown-to-interception ratio (40:1) and was invited to New York. Chase Young is the most dynamic defensive playmaker in the country and a possible number-one overall pick in this year’s draft. Clemson’s Trevor Lawrence has been hailed as the best NFL prospect since Andrew Luck since he was a high school player.

Inside, top-five prospect Isaiah Simmons leads a Clemson defense that somehow improved upon last year’s historic squad. That defense is allowing just 2.9 yards per carry (ninth), matched up against Ohio State’s JK Dobbins (6.5 ypc), who finished sixth in Heisman voting. Dobbins was able to run behind a stout offensive line that ranks third in line yards per carry (according to Football Outsiders).

Dabo Swinney has established himself in the elite of the elite club, inhabited by just one other coach, Nick Saban. Swinney has two rings in the past three years, including last season’s 44–16 drubbing of Alabama. He’s commanded the respect of every opponent and is well-seasoned in tough situations; outside of the two championships he’s won, he’s taken Clemson to four straight Playoffs and appeared in three National Championship games.

Questions and pressure surrounded Ryan Day when he was hired to succeed legendary coach Urban Meyer last December. Though relatively unproven as a head coach, Day maximized his team’s potential– starting off 16-0 as a head coach and winning games by an average mark of 32 points per game. Needless to say, he’s proven himself as a capable winner and an offensive guru. Day was able to overcome pressure in the Big Ten Championship game, coaching his team to a massive second-half comeback. But the lights have never been brighter, and the country is eager to see how Day conducts his team.

This is the fourth meeting between the Tigers and Buckeyes, with Clemson taking every previous matchup. In 2016, there was the infamous 31–0 game; in 2014, the massive underdog Tigers upset the Buckeyes, sparking Dabo Swinney’s reign; in 1978, it was the infamous game that ended Woody Hayes’ coaching career after he shoved a Clemson player to the ground. Bottom line, every matchup is historic between these teams.

This season, Clemson leads the way against the spread (ATS) with a 10-3 mark. Ohio State trails by just one game, coming into this game 9-4 ATS. Clemson is 1-0 ATS against teams ranked in the final top 25 (vs Virginia), while Ohio State sits at 3-2 ATS against ranked teams. Both teams have one loss each ATS at neutral sites. Ohio State and Clemson have dominated almost every team they’ve played this year, and are on a massive collision course in this one.

Both teams combine for a 0.500 mark versus the over/under (O/U). They’ve also come within seven points the O/U mark with their own scores a combined eight times this season. It’s no doubt that both Clemson and Ohio State have shouldered the weight of the O/U, since the Tigers never allowed 21 or more points this year, and Ohio State never allowed 28 or more. With such high-powered and talented offenses, at least one of these marks are bound to break. There might not be a better football game this season.

The case for both sides

Why Ohio State can win

The game is simple for the Buckeyes: protect Justin Fields and open up lanes for JK Dobbins. If this team plays confident and to their potential, they’ll make quite a statement against Clemson. Ohio State has the most dangerous and capable offense outside of LSU and the most talented defense in the nation (two first-team All-Americans, best in the nation). They’ve solved almost every issue that’s plagued them in years’ past– beating themselves with penalties and playing down to their opponent’s level– and are poised to upset Clemson in the semifinal.

Why Clemson can win

What case really needs to be made? The defending champions with a battle-tested superstar quarterback, an airtight offensive line and a suffocating defense. They have all the pieces necessary to not only win the semifinal, but to repeat as champions. They’re led by one of the best head coaches in the country and their whole roster is very experienced in Playoff situations. On paper, there’s no reason Clemson shouldn’t win this one. Similar to Ohio State, if they play to their potential, the Tigers will find themselves in another title game. 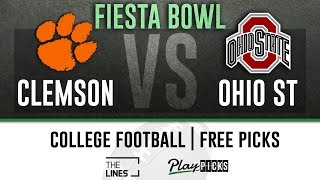