The Philadelphia Eagles (5-7) fell flat offensively in their Week 12 loss to the Giants, scoring a season-low seven points. Jalen Hurts turned the ball over three times and completed just 45% of his passes. The Eagles travel to face the New York Jets (3-8) as road favorites in Week 13. Hurts faces the second-worst pass defense in the NFL, per Football Outsiders’ DVOA ranking, with a chance to turn around. This game has an over/under of points.

Below, you can find Philadelphia Eagles odds for 2021. Included is a weekly outlook, odds for every game this season, futures, and more. 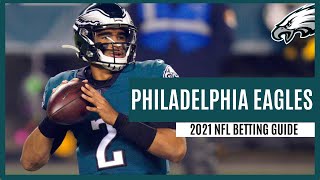 Futures are long-term bets that can range from an offseason to a full season (or beyond). Team win totals, award winners, and player performance are common futures.

Prop bets are based on individual performance, typically surrounding players. While healthy in 2020, Miles Sanders was one of the most popular players when it came to prop bets for the Eagles. For example, in Philly’s Week 14 game against the New Orleans Saints, Sanders was projected to have just 43.5 rushing yards. He went off for 115 rushing yards against the league’s number-one rush defense, giving those who bet the over on his rushing prop the win.

Search below for Philadelphia Eagles team or player props currently being offered at sportsbooks. You can also look around at other teams and players using this tool. Happy shopping!

How to bet on the Philadelphia Eagles

The moneyline is the simplest of bets, decided by the straight-up winner and loser of each game. Consider the following example:

The Eagles are considered heavy underdogs in this matchup (indicated by -185), paying out $410 total for a $100 bet ($310 in winnings). The Chargers are the favorite in this matchup, requiring a $185 bet to win $100 (plus the initial bet back). How much either team wins or loses by does not matter in moneyline betting, the payout remains the same.

Betting on the point spread is determinant on how many points a team wins or loses by. Take the following example:

The point total refers to the over/under line set by books. This number projects the total number of points scored in a game and, like prop betting, is bet whether one thinks the score will go over or under the set point total. For example, the Eagles’ Week 8 matchup against the Dallas Cowboys had a projected point total of 56.5 points. The Eagles won that game 23-9, resulting in 32 combined points. Those who bet the under in this game would have cashed out.

In 2020, the Eagles played in plenty of both high- and low-scoring games. This caused oddsmakers to set average point totals for the Eagles that were often swayed by their opponent. For instance, games against potent offenses like Baltimore and Green Bay had a higher point total (between 53 and 56 points) while games against New York and Washington resulted in lower point totals (between 45 and 49 points).

Sometimes, the most thrilling and rewarding bets are bets made while games are being played. These are referred to as live bets or in-play bets. Odds are ever-changing during games, which would prove to be fruitful for sharp and prepared bettors. For example, if the Eagles (-225) were heavily favored against the Raiders (+190) before kickoff, a payout on a $10 bet on the Eagles to win would win just $4.44.

However, say the Eagles fell to a big 17-3 deficit in the first half despite controlling the overall game (due to a costly turnover or special teams gaffe). Odds may swing in favor of the Raiders, who may be a -110 favorite at halftime. Taking the Eagles to come back and win the game could present plus-odds (say, +130). Should a bettor take Philadelphia (+130) at halftime and the Eagles pull off the comeback, winners would win $13 instead of $4.44 (plus the initial $10 bet).

This could also be an effective way to “hedge” your bet; say a bettor took the Raiders (+190) in that game, but Philadelphia jumps out to a 10-0 first quarter lead and is controlling the overall feel of the game, bettors could hedge by throwing some money down on Philadelphia (-270) to return some of the inevitably-lost bet.

You can always string bets together in the form of parlays or teasers. Usually during busy Sundays, bettors can parlay several teams to win or cover against the spread and if all bets are successful, the payouts are multiplied. Teasers function similarly, except they allow bettors to move each point spread to a more favorable line in exchange for diminished odds.

It wasn’t a year that Eagles fans want to remember, riddled with injuries and quarterback uncertainty. The potential NFC contenders showed their colors early on in the season when they started 1-4-1 (the tie came against the Bengals). Carson Wentz struggled to find a rhythm while, once again, his top weapons were decimated due to injury. Philly led the NFL in sacks allowed (4.1 was an entire sack more than the next most in Houston) and the defensive secondary was carved time and time again.

As mentioned, the Eagles were expected to contend for not only the NFC East, but the NFC’s spot in the Super Bowl; this resulted in most of their early season games being in favor of the Eagles. After dropping Week 1 to the Washington Football Team and tying the Bengals in Week 3, serious questions arose and oddsmakers adjusted their expectations for the Eagles.

Where can I bet on sports in Pennsylvania?

Pennsylvania sports betting was one of the first in the nation, and there many options to get a bet down on the Philadelphia Eagles or any other NFL team. Here’s a list of legal sportsbook options in Pennsylvania: