After another exciting week of late finishes and upsets, we look forward to Week 7 of the NFL season. This is the first week with four teams on bye so there are only 14 games on the slate. Below you’ll be able to compare how New Jersey sportsbooks are attacking the Week 7 NFL spreads and totals. Be on the lookout for updated lines all week, along video analysis from our friends at PlayPicks.com. 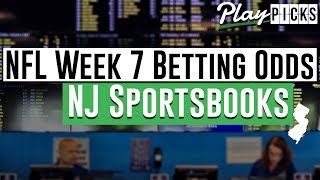 Denver (-1) at Arizona: Broncos get the nod from the books despite not winning yet on the road. Might be the recency bias as they covered against the Rams at home. The Cards have lost all their home games but are 2-1 ATS.

Tennessee vs. LA Chargers (-6.5) in London: A 6:30 a.m. local kickoff for the Bolts, so fans in LA will get home from their Saturday night festivities just in time for kickoff. Philip Rivers enters 6-1 against the Titans.

New England (-1) at Chicago: Another week, another Brady vs. rising star QB matchup. Brady enters 4-0 against the Bears. FanDuel was the first to price this game in NJ.

Minnesota (-3) at NY Jets: This might be a case of regional bias with the books expecting the Jets to stay hot at home against a Super Bowl contender. Kirk Cousins lost his only start against the Jets while playing for Washington in 2015.

Cleveland at Tampa Bay (-3.5): Two Heisman-winning QBs face off, both coming off a loss. Tampa has won three of the last four in this series.

Houston at Jacksonville (-4.5): This game will help settle the three-way logjam atop the AFC South. Since 2011, whoever wins the season’s first matchup has won the second (5 of 7 times it’s been the Texans). BetStars and William Hill Sportsbook have a half-point extra value on the over.

Buffalo at Indianapolis (-7.5): Books waited until Tuesday for the injury status of Bills QB Josh Allen, who has been ruled out for the game. Derek Anderson will get the start under center. Andrew Luck is 1-1 SU and ATS in his career against the Bills.

Detroit (-3) at Miami: This game wasn’t posted until mid-week when the Dolphins named Brock Osweiler the starting QB for the second straight week. Matthew Stafford won (and covered) his only previous career start against Miami.

New Orleans at Baltimore (-2.5): The Ravens get the recency bias after their dominant win at Tennessee but the Saints have had an extra week of rest coming off the bye.

Dallas (-1) at Washington: Both teams played well in home wins last week. Dak Prescott enters 4-0 in starts against the division rivals and covered both times in Landover. Curious to see how the NJ bettors move this game between the NFC foes.

LA Rams (-9) at San Francisco: The Rams keep winning but haven’t covered in the last two weeks. William Hill has a half-point extra value on the Niners, while FanDuel opened with a full extra point on the spread.

Cincinnati at Kansas City (-6): In the first SNF “flex game” of the season, both teams enter off gut-wrenching late losses. Andy Dalton won both career starts against the Chiefs.

NY Giants at Atlanta (-3.5): Matt Ryan and Eli Manning have split their four meetings, with the Falcons winning the only one in Atlanta. FanDuel holds the most pro-Giants positions of the NJ books, offering a half-point extra value to the visitors and the under as of Monday.