Here’s a first look at how the New Jersey sportsbooks are pricing the Week 6 NFL spreads and totals. Be on the lookout for updated lines all week, along with Super Bowl futures and analysis from our friends at PlayPicks.com. 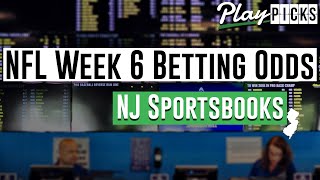 Seattle (-3) vs. Oakland (London): Two West Coast teams playing in the early window eight time zones away from home? Yeah, this should be interesting.

Philadelphia (-3) at NY Giants: This will be really interesting because it’s the first regular season game where both teams carry regional bias in New Jersey. Most books get more action on Big Blue than the Eagles in NJ. Eli Manning enters the game 10-18 against Philly.

Arizona at Minnesota (-10.5): Again, Minnesota enters the biggest favorite of the weekend coming off a road victory in Philly. They have won the last eight games at home against the Cardinals, who last won in Minnesota in 1977.

Chicago (-3) at Miami: The Bears’ hot September gives them some steam coming off the bye week. Miami has lost two straight after starting the year 0-3. The Dolphins melted in the fourth quarter in Week 5.

Indianapolis at NY Jets (-2.5): The Jets open as a favorite after the convincing win at home against Denver. Colts backers got an extra half-point value at William Hill app on Monday. Andrew Luck enters the game 1-2 against the Jets.

Tampa Bay at Atlanta (-3): The teams have split the last six games in this divisional rivalry. FOX Bet offered an half-point extra value at open for the Bucs, who are coming off the bye week.

LA Chargers at Cleveland (-1): Don’t like the favorite traveling cross country for the early kick? William Hill and BetStars opened the Browns at +1.5 on Monday, but then the line moved 2.5 points to Browns -1.

Pittsburgh at Cincinnati (-1): The red-hot Bengals open as a +2.5 favorite despite having lost eight of the last nine against the Steelers.

Carolina at Washington (-1): Interesting discrepancies between Kambi books (DraftKings, SugarHouse, 888sport) and other operators as of Tuesday. The Redskins were -4 at open at Kambi, and -1 at the rest of the books. The line moved to CAR -1 on Saturday.

Buffalo at Houston (-10): No book had posted this game as of Tuesday as they waited on Deshaun Watson’s status. Most listed at HOU -10 as of Thursday morning. The Texans have won three of the last four meetings, include the last two in Texas.

LA Rams (-7) at Denver: The Rams have won the last three in this series. Expect the total (52) to move on this one during the week.

Baltimore (-2.5) at Tennessee: Both teams coming off upset losses on the road last week. Tennessee has won the last two match-ups at home.

Jacksonville (-3) at Dallas: Every book opened this at Jags -3. The Jags’ loss at KC might give a boost for Dallas while keeping the total on the lower side.

Kansas City at New England (-3.5): No recency bias here for the undefeated Chiefs as Mahomes takes on the Pats. BetStars and FanDuel opened this at -3.5 and some of the other books followed by adding the hook.

San Francisco at Green Bay (-9.5): Aaron Rodgers enters the game 3-2 against the Niners. FanDuel gave a half-point extra value to the visitors at open but dropped the line back to -9.5 on Tuesday.