The 2019-20 NHL regular season was finally put to bed Tuesday as a 24-team playoff was announced to begin at some point later this summer. Commissioner Gary Bettman revealed the league’s plan to have the top 12 teams from each conference, as of March 12, compete for the Stanley Cup. The first of the major North American sporting leagues to announce a planned return, sportsbooks have scrambled to settle and/or adjust all outstanding NHL futures bets.

The season was put on pause after the Los Angeles Kings beat the Ottawa Senators 3-2 on Wednesday, March 11, due to the COVID-19 pandemic. The Kings and Senators, and the next five teams at the bottom of the NHL standings will be left out of the postseason. Their next date to look forward to is the 2020 NHL draft lottery, set for Friday, June 26.

It’s important to note nothing is yet officially official and few dates have been set in stone, but here is what we know about the proposed NHL playoff structure and key dates for the remainder of the league year:

The first and second rounds of the playoffs will be seeded and follow a bracket. The series lengths are yet to be determined. Conference Finals and the Stanley Cup Final will follow the traditional best-of-seven format.
2020 first-round matchups 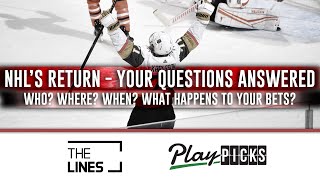 Be sure to check with your preferred sportsbook for the status of your NHL futures bets. Each will have its own rules and regulations for which wagers will be voided or remain outstanding.

BetMGM, for example, voided all Division winners and Season win totals bets as it wasn’t an 82-game regular season. They will still honor all Stanley Cup Champions, Conference Champions, and Season Award Winners. All of those tickets remain open.

The new NHL futures market is sure to be updated and filled-out across all sportsbooks in the coming days, weeks, and months. Look for new odds for conference champions, top-four seeding, and player awards.

Westgate got the early lead by releasing series odds for the qualification round: