We’re at the halfway point of the NFL season with only 13 games on the schedule this week. In this article we take a look at how sportsbooks are pricing them early, and how lines move during the week.

This is a pretty important week for the New Jersey sports betting market. Both the Eagles and Giants, responsible for a big chunk of action over the first two months, are on bye. The betting public has been hitting winners the past two weeks, so can they carry this momentum into November? Here are the latest Week 9 NFL lines at the NJ books. 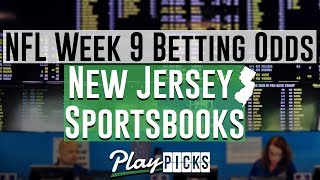 Raiders at 49ers (-2.5): Both teams coming off late losses Sunday. FanDuel and BetStars each priced the Raiders at +3.5 on Monday afternoon but the line moved toward during the week Oakland. Nick Mullens will start for the Niners.

Falcons at Redskins (-2.5): Washington opened as a short home favorite after winning three in a row, but Matt Ryan enters the matchup 4-0 against them. Early steam on Sunday moved this to WAS -2.5 at some books.

Chiefs (-8.5) at Browns: KC enters hot and has won three of the last four in this matchup. The Browns won the last meeting in Cleveland — in 2012. The spread and total on this game have been mostly static all week, even with the coaching changes in Cleveland.

Steelers at Ravens (-1): The home team gets the slight nod over one of the hottest teams in the league. The Ravens have won 4 of the last 5 at home against the Steelers, which might explain the three-point line at open. However, books dropped this as low as BAL -1 on Sunday.

Jets at Dolphins (-3): Weather is expected to play a factor in this one, which would explain the total dropping several points all the way down to 41 on Sunday. With Ryan Tannehill out at least a couple more weeks, Brock Osweiler is a home favorite.

Buccaneers at Panthers (-6): Ryan Fitzpatrick replaces Jameis Winston under center in Tampa. Carolina gets the recency bias at home and has won eight of the last 10 in the rivalry.

Lions at Vikings (-5): FanDuel was the first to post this game at Vikes -5 and is stayed within a point at most books during the week. Detroit’s Matthew Stafford is 8-8 in his career against Minnesota.

Bears (-10.5) at Bills: This game was completely off the board Monday as Josh Allen and others’ availability remained in question. On Tuesday, the Bills announced that Nathan Peterman will be back under center on Sunday. Buffalo has been significant underdogs in their other two games against NFC North opponents.

Texans at Broncos (-1): The Broncos got early the nod from books, but the line moved toward Houston to a PK at several books on Tuesday. Note: Teams who won the previous week’s Thursday night game are 2-5 the next game this season. Houston won easily against Monday last Thursday.

Chargers at Seahawks (-1): Phillip Rivers enters 10-4 against NFC West foes. This opened at SEA -2 at most books but the Chargers are getting the steam late in the week coming off the bye.

Rams (-1.5) at Saints: FanDuel opened this with the highest total (60) seen since 2004, but it dropped several points leading into the weekend. Drew Brees enters a career 3-5 against the Rams. FanDuel listed this as a pick’em at open, then the line moved to Saints -2 on Tuesday, and then swung back into the Rams favor late in the week.

Packers at Patriots (-4.5): This marks only the second time Brady and Rodgers have faced off. They tried this years ago and we got Matt Flynn under center against the Pats. Aaron Rodgers enters 19-18 in November, his worst month as a starter.

Titans at Cowboys (-4.5): Dallas has won three of the last four against Tennessee. The Cowboys opened -6 but the line has dropped to as low as -4 as of Sunday morning.