One month into the NFL season and we’re seeing more books available in New Jersey. These books are starting to offer quicker turnaround in action on NJ sports betting lines every week, similar to what we see in Vegas. Let’s take a look at the prices as we welcome October. 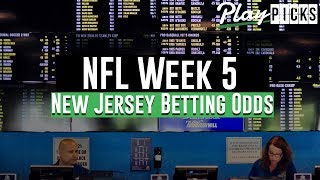 Indianapolis at New England (-10): FanDuel, MGM and William Hill app gave the half-point extra value to the Colts as of Tuesday. Tom Brady has won the last five against Indy but is only 2-3 ATS in those games.

Tennessee (-5.5) at Buffalo: The AFC South leaders opened as the favorites with +100 or higher at most books to cover the field goal and half-point kicker. The line moved two points at most books to TEN -5 or 5.5 during the week. The Titans have won their last three games in Buffalo.

Miami at Cincinnati (-6): Miami is coming off an embarrassing first loss at New England, while the Bengals marched out of Atlanta with a win as a dog. William Hill added a half-point extra value to the Dolphins at open and held at -5.5 as of Tuesday. Andy Dalton is 1-2 SU and ATS against Miami.

Green Bay at Detroit (-1) : This opened at 1 or 1.5 at all of the NJ books in favor of the road team but moved in favor of the Lions over the weekend. Aaron Rodgers is 13-3 in his career against the Lions.

Jacksonville at Kansas City (-3): Mahomes gets another test against a tough pass rush after facing Denver on Monday night. The Jags got a nice backdoor cover in their last visit to KC in 2016.

NY Giants at Carolina (-6.5): FanDuel gave the local team a half-point extra value at open but this is likely to close at 7. Cam Newton is 2-1 SU but 1-2 ATS against Big Blue.

Baltimore (-3) at Cleveland: Cleveland lost its first game ATS last week in Oakland. Every NJ operator listed this at Ravens -3 as of Tuesday.

Denver (-1) at NY Jets: This one opened with the Jets favored after Denver’s Monday night loss to the Chiefs, but all of the books listed the Broncos as the road favorite as of Sunday morning.

Atlanta at Pittsburgh (-3): Can we say must-win for two playoff favorites who have struggled in September? Big Ben has won both of his match-ups against Matty Ice.  The 57-point total is the highest of the year s far.

Oakland at LA Chargers (-5.5): Both teams coming off close wins. Phillip Rivers enters Sunday 16-8 in his career against the Raiders.

LA Rams (-7) at Seattle: The teams have split the four games since the Rams moved back to Los Angeles. This opened at -6.5 on FanDuel but moved to 7 as of Tuesday.

Minnesota at Philadelphia (-3): The Eagles have won four of the last five against the Vikings, including the NFC title game in January. Kirk Cousins enters 4-3 against Philly from his days with Washington.

Arizona at San Francisco (-4): The Niners were favored at open despite having lost the last six against the Cardinals.

Dallas at Houston (-3.5): Unfortunately, it’s too early to flex this game out for a better one on Sunday night. Some of the books are giving Dallas the hook at +3.5 as of Tuesday.

Washington at New Orleans (-6.5): Drew Brees enters the Monday night game 3-4 against Washington. FanDuel was the only book to set this at Saints -7 as of Tuesday.