Each week during the 2021 NFL season, TheLines will examine how the coming week’s NFL lines have changed relative to preseason or prior expectations. Often, early lines can give an objective look at teams’ relative talent levels, absent week-to-week recency bias when the weekend results take hold. Let’s take a look at NFL Week 2 spreads and see which numbers have change and, potentially, why.

Tracked lines below come from FanDuel Sportsbook, which provide the basis for our Week 2 look-ahead lines. Prices are -110, unless otherwise noted.

The Jacksonville Jaguars turned in perhaps the biggest dud of anyone in Week 1. Tabbed as -3.5 favorites over the lowly Texans, they laid a monster egg in going down an incredible 27 points en route to a 37-21 loss. New QB Trevor Lawrence fired three INTs and a Houston offense that excited nobody scored 34 before taking their foot off the gas.

After some liked the Jags as a sneaky dark horse in a bad division, they look like an immediate candidate to draft first overall for the second year running.

Combine that with a fairly impressive road win by Denver and you have the recipe for a sizable move here. Most critically, what was expected to be a shaky offense produced a solid 6.4 yards per play (YPP) on the road against a decent defense.

Everyone’s going to line up to fade the Jags once again, it appears. The market has adjusted in kind by making them decent-sized home dogs against a middle-of-the-pack team.

The Bucs looked pretty sterling in basically every aspect of football aside from ball security in the Thursday opener. They had their way with the Cowboys defense in particular, posting 7.6 YPA through the air.

Already expected to be large favorites at home, the Bucs did nothing to diminish those feelings. If anything, the market confidence in them likely increased.

Meanwhile, all of the hype around the arrival of head coach Art Smith for the Falcons proved unfounded thus far. The supposed offensive guru led his squad to an incredible 3.6 YPA through the air — at home, in a dome, no less.

Granted the Bucs had some trouble stopping the Cowboys through the air in Week 1. But, we know they’re capable of high-end play after they shut down the Chiefs’ all-world offense in last season’s Super Bowl.

This looks very far from a get-right spot for the Dirty Birds. The market has made Tampa a double-digit favorite. Expect much more of that throughout the year if they continue to play like they did Week 1.

Meanwhile, three other teams crossed the key number of 3.

What figures to be the most-bet game of Week 2 pits perennial contenders Kansas City and Baltimore against each other on the East Coast.

The Chiefs have experienced consistent success against the Ravens in the Lamar Jackson era, winning:

That seems a bit counterintuitive, perhaps, given the Chiefs’ consistent inability to stop the run and the Ravens’ outstanding rushing attack. However, the blitz-happy Ravens seem unable to slow Andy Reid’s offense, which has been especially potent against the blitz thanks to the brilliance of Patrick Mahomes.

Bettors surely remember these games and everyone watched the Ravens struggle in the opening loss to Las Vegas. Thus, KC crossing -3 and even edging toward -4 rates as little surprise.

Continuing the theme, this one pits a team that looked very good in Week 1 (Cardinals) against a team that well underperformed market expectations (Vikings).

Everyone expected Arizona to field a fairly strong offense, but the defense shocked many by dominating a well-regarded Tennessee offense loaded at the skill positions. They completely overwhelmed the Titans front in amassing six sacks.

The Vikings had a tough time blocking the Bengals in Week 1. They do figure to have an edge on the outside, but will Kirk Cousins get the time he needs to exploit that?

The market is skeptical. An Arizona team initially expected to be on roughly the same level as the Vikes is pushing toward -4.

New QB Matt Stafford sparkled in his Rams debut. The team punted just once in the entirety of their easy win over the Bears and it happened in front of a national TV audience. Easy enough for the market to take note of that.

The Colts came into the season with a pretty wide bar of outcomes. They had a rather rough preseason but Carson Wentz did manage to take the first snap, against some odds. He neither embarrassed himself like in 2020 nor did he crush it in his debut.

The real concern comes from the fact Seattle passed all over the Colts to the tune of 9.3 YPA.

Rams Coach Sean McVay has never been afraid to attack with a pass-first game plan. They don’t have quite the weapons of the Seahawks but Robert Woods and Cooper Kupp will be no picnic to cover. 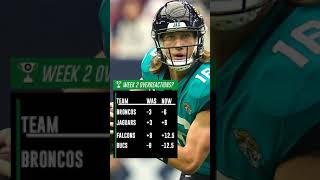