As has been the case since 2006, we have a three-game Thanksgiving slate on Thursday. The Lions and Cowboys naturally host the first two contests, while the primetime affair is an NFC South showdown between the Saints and Falcons. Each of the three matchups has its own unique theme.

The Bears-Lions NFC North battle that opens the day features two teams that have fallen way behind division pacesetters Green Bay and Minnesota and consequently haver their postseason hopes hanging by a thread. Lions coach Matt Patricia’s hold on his job is likely about as tenuous as well at this point. The fact Chicago has steadily remained almost a field-goal road favorite since this line opened speaks to how unreliable Detroit currently is without Matthew Stafford (back) at the controls.

The mid-afternoon Bills-Cowboys matchup already carries the intrigue that interconference games often do. However, the line is also an interesting one, considering Buffalo’s two-game edge over Dallas in the win column and their strong road track record. Jason Garrett is a likely goner at the end of the season, although winning this game would certainly go a long way to lightening the mood at Valley Ranch for the time being.

Finally, the Saints are barreling toward another postseason appearance and have a golden opportunity to exact a little revenge on the team that handed them an embarrassing upset three games ago. New Orleans will be highly comfortable in the dome confines of Mercedes-Benz Stadium, although they’ll be facing a team with nothing to lose in 3-8 Atlanta.

The Bears’ status as narrow road favorites here arguably says more about the Lions than it does about Chicago. Detroit fulfilled another leg of a possible Matt Patricia “Two and Done” tour with a loss to the lowly Redskins in Week 12. Meanwhile, the Bears barely got by an equally bad NFC East opponent in the Giants on their own home turf. Neither team brings much offensively to the table at this point, as Matthew Stafford is set to miss another game with his multiple back fractures and Mitchell Trubisky is still Mitchell Trubisky.

However, if there was ever a good late-season get-right spot for the mostly moribund Chicago offense, it would be versus a Lions squad that’s now allowing 26.5 points and 396.2 yards per game. The Bears did that to an extent in the Week 10 matchup at Soldier Field, with Trubisky throwing three touchdowns. However, coach Matt Nagy continues to rely heavily on his defense whenever possible and Jeff Driskel, while serviceable, certainly lowers the overall upside of Detroit’s air attack when compared to a healthy Stafford.

This is easily the most eye-catching spread of the three Thanksgiving battles. There seems to be a general perception that Dallas almost always prevails on Turkey Day, but the ‘Boys are actually just 2-3 straight up on the holiday over the last five years. Moreover, both of their wins were narrow victories over the typically struggling Redskins.

The two squads also come in here traveling significantly different paths. The Bills are surging at 8-3 and boast a 4-1 mark on the road. The Cowboys are 6-5 and have yet to beat a team with a winning record. Much like Patricia might be, Jason Garrett could be in the midst of his last handful of games in his current post. What’s more, Dallas has two home losses already on its ledger this season, having dropped decisions to two of Buffalo’s fellow playoff contenders, the Packers and Vikings.

The Bills’ defense is also of difference-maker quality and has the horses to at least slow down Dak Prescott and his potent offensive teammates. This is a very beatable spread for the Bills in my view, with an outright upset not out of the question, either.

As alluded to earlier, the Falcons’ two-game bubble may have burst courtesy of a fellow underachieving NFC South mate in the Buccaneers on Sunday. Now they’ll draw a date with a Saints team that they absolutely embarrassed on their own home turf back in Week 10, a 26-9 victory that started Atlanta’s modest surge.

That’s likely very bad news for the Falcons, even with Dan Quinn’s squad possibly getting Devonta Freeman back from a foot sprain for this game. Julio Jones is also dealing with a bit of a shoulder issue that popped up versus Tampa but that shouldn’t prevent him from suiting up. The Saints simply have too much firepower for an Atlanta defense that began to show some of its warts again versus the Bucs. And needless to say, there will be plenty of extra motivation on the part of New Orleans. The Saints would undoubtedly like to erase the memory of how woefully unprepared they looked three games ago, and it’s safe to say they won’t walk into this matchup with any overconfidence. 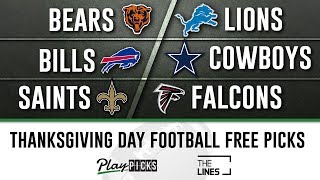