Survivor pools have become one of the most popular gambling options for NFL fans in recent years. Big brands like DraftKings and Circa are among those offering monster prizes in 2021. Each week, TheLines will run through some of the best survivor options to help you win your pool. Read on for NFL survivor Week 9 plays.

At long last, some blood in the streets in NFL survivor. The Bengals killed a lot of entries with their flop in New York. In fact, ESPN’s survivor pool said goodbye to nearly 45,000 entries, with half of the original field now done.

Get used to seeing the Bills here. They have a cakewalk of a schedule the rest of the way, projected as double-digit favorites in five more games and close in two others.

There are actually some worrying trends for the Bills. The offense just hasn’t looked near as explosive as it did in 2020. They slogged through the Miami game with just 5.8 yards per pass. The offense ranks just sixth in EPA/play despite facing a fairly inviting run of defenses.

Still, assignments don’t come much easier than the Jaguars. You can be sure the Bills staff will happily eschew using the run — where the Jags are actually competent on D — and pass all over this defense.

The Bills’ schedule makes them an unexciting option, though. They’re a good ace to hold up your sleeve for a tougher week down the line.

The Colts look more enticing. They do still have a couple of games where they should be solid favorites. One comes next week hosting the Jags. If you want to save the Colts for that one, we can’t blame you. At Houston looks potentially tougher as Tyrod Taylor should have returned by Week 13.

What to make of the Mike White Cinderella story? The former fifth-rounder looked legitimately capable of leading an NFL offense as he diced up the Bengals for 8.1 yards per pass. Firing 40% of his targets to running backs probably won’t keep working, but Corey Davis should return at some point soon.

Placing your trust in Carson Wentz is always a major risk. Look no further than his lowlights the past two weeks. But, the Colts should definitely prevail at home here against a bottom-tier team.

First, Dallas. After he logged some practice time ahead of Week 8, the Cowboys hoped Dak Prescott would play against Minnesota. Alas, it didn’t happen, but backup Cooper Rush played hero and led the team to a low-scoring win, though he certainly held his own with 7.8 YPA.

While the ecosystem in Dallas couldn’t set up better for Rush, you ultimately can’t trust your survivor entry to backup QBs unless every other factor lines up absolutely perfectly. A competent Denver team coming to town doesn’t qualify. Assuming Prescott does play, this spot looks decent.

Miami also has QB uncertainty to deal with, but it’s the opposing Texans with the question mark. Tyrod Taylor returned to practice this week but the team ruled him out on Friday.

The Texans continued to look like a free space with Davis Mills at QB. The Rams shut them out before a late garbage-time flurry. Don’t be fooled. Even the lowly Dolphins should win this easily if Taylor remains sidelined.

Miami has just one more game as decent favorites, home to Jets in Week 15. If you can stomach it and Mills starts for Houston, this is a good spot to pinch the nose and fire.

The Steelers showed their defensive mettle again in clamping down on Cleveland. A Chicago offense that’s third-worst in EPA/play will have trouble getting to 17 points. And the Steelers can’t be used again outside of Week 10 against Detroit. 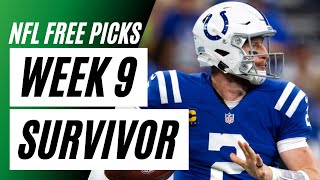 Taking a road team in survivor, one that isn’t dominant, is always a dicey proposition. But, the Raiders do get an ideal situation spot in some other ways. They come off their bye while the Giants play after a short week following Monday Night Football.

A bellwether for the Raiders has been their ability to throw down the field. When Derek Carr finds people deep, the Raiders are tough to beat. When he channels his inner Chad Pennington, this offense goes nowhere.

According to Sharp Football Stats, the Giants rank in the middle of the pack in allowing explosive plays. Watch how they defend the Chiefs and see if they can keep plays in front of them.

Las Vegas has a really tough schedule the rest of the way. Home against Washington looks like the only other chance to use them aside from this game.