The NBA season continues with two more national TV games tonight on TNT, Knicks at Nets and Warriors at Suns. Each week throughout the season, TheLines will look at some matchups for the televised slates and try to figure if there are any TNT NBA player props worth a look.

When legal US sportsbooks release player props Tuesday afternoon, the player tiles below will populate with the best available odds for each of their prop markets. Before game props are released, they will show player futures.

You can also search TNT NBA player props using our tool below.

The Knicks have made a major change to their lineup, benching Kemba Walker and elevating Alec Burks to the starting lineup. When you’re approaching betting this game, keep in mind that this could have a hugely beneficial effect, if some of the on/off metrics are to be believed.

Lineups lacking Walker have a +14 differential per 100 possessions, a 95th percentile number according to Cleaning The Glass. Most of these lineups contain Derrick Rose, who is questionable and may miss the game with an ankle injury. Even without Rose, though, the Knicks are still over +12, albeit in a much smaller sample.

Burks and Immanuel Quickley appear to benefit most from the current set-up. Burks saw a huge 39 minutes while Quickley played 31 in the team’s last game. Quickley has the higher usage rate of the two. He jacked 12 shots in those 31 minutes but scored just 9 points. He ranks in the 93rd percentile on points per shot attempt, though, so that number should rise and his points prop should reflect that.

The Nets have also had to adjust their lineups recently. They elevated LaMarcus Aldridge and DeAndre’ Bembry to the starting lineup with Blake Griffin massively underperforming and Joe Harris out injured and due for surgery.

Don’t expect much from Bembry. He has the lowest usage rate on the team at 12%.

Aldridge is a different story. He’s been firing away with a 78th percentile usage and he’s been efficient enough to justify it with 1.26 points per shot attempt.

Opposing C Mitchell Robinson, while a shot-blocking monster, does not have a strong track record of post defense. He landed in just the 8th percentile last year according to the league’s tracking stats. Look for Aldridge to school him some.

Of course, most of the Nets’ offense flows through their two superstars. Of the two, James Harden figures to have a nicer matchup here. The Knicks have been notably poor defending the 3-point line this year, where Harden takes a much, much higher percentage of his volume than Kevin Durant. None of the Knicks guards profile as defensive stoppers, so he might be able to continue a recent surge.

This game should be a treat for NBA fans everywhere. The two best in the association will face off in Phoenix in a potential conference finals preview. That would have sounded a little farfetched if you looked at the projection systems in the preseason, but the market has proved itself right thus far on the Warriors.

Right away, we should note the Suns play down in pace in this spot. They play the third-fastest while the Warriors rank 17th. Furthermore, with the Warriors sporting the best defense in basketball by a mile, Phoenix unders will likely be in play if the market doesn’t make the appropriate adjustments.

Might Devin Booker see some Draymond Green defense? If he does, as Damian Lillard did earlier this year, that could bode ill for him in particular.

Chris Paul and Mikal Bridges might rack up some numbers in the steal department. Both players have been elite thieves this year, with Bridges in particular shining lately. He tallied an incredible 7 swipes against the Nets in the last game. Paul, meanwhile, has a 98th percentile steal rate. He remains elite on that end, and turnovers are the only real weakness shown by the Warriors thus far — they rank 25th.

Nobody in the league has scorched the nets on the level of Stephen Curry so far. He has scored a monstrous 1.32 points per shot attempt while firing at a very high volume. Playing up in pace against the Suns may offer him a few extra possessions to pad his stats.

On the other hand, the Suns rate as an elite defensive bunch as well, ranking third in efficiency on that end. 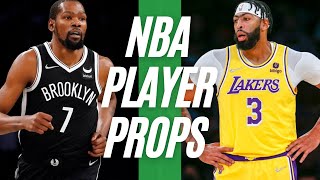