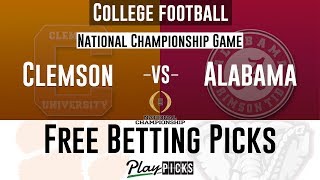 TheLines provides a breakdown and analysis for the NCAA’s National Title Game on Monday night. We’ll look at the odds and see why they’re moving a certain way, along with breaking down the matchup and providing the week’s best prop bets.

The top two college football squads in the nation clash at Levi Stadium in Santa Clara, California on Monday night to decide which will hold the mantle of top team in the nation for the just-concluded 2018 season. Alabama and Clemson both forged perfect 14-0 records during the regular season.

The Crimson Tide was 8-0 in the Southeastern Conference, defeating the Georgia Bulldogs in the conference title game by a 35-28 score Dec. 1. They earned their way into Monday night’s championship game with a 45-34 victory over the Oklahoma Sooners in the Orange Bowl semi-final at Hard Rock Stadium in Miami.

The Tigers were 8-0 in the Atlantic Coast Conference, defeating the Pittsburgh Panthers in the conference title game by a 42-10 score Dec. 1. They earned their way into Monday night’s championship game with a 30-3 victory over the Notre Dame Fighting Irish in the Cotton Bowl semi-final at AT & T Stadium in Dallas.

The line has fluctuated at DraftKings Sportsbook within a point over the last week, but the Crimson Tide has never been less than five-point favorites. The apex was a six-point spread in favor of Alabama a week ago. Substantial money clearly came in on Clemson at that point, enough to move the line a full point down to five late in the week last week. There’s been additional fluctuation since, with the Tide bouncing back to 5.5-point favorites Sunday, reverting back to a five-point number earlier Monday, and then landing on 5.5 yet again as of early Monday afternoon.

The projected total at DraftKings Sportsbook has been much more volatile. At 59 points a week ago, the total reached a high point of 60.5 by the middle of last week. A downward slide then ensued, one that eventually saw the total sink as low 57.5 earlier Monday before jutting back up to 58. As of this writing early Monday afternoon, the number had hit a new low of 57 before dropping again to 56.5 two hours before kickoff.

The battle of college football’s juggernauts is a familiar one. The series between the schools has a 118-year history, but the most recent games have been particularly high-stakes affairs. The Crimson Tide and Tigers have met in the National Championship Game after both the 2016 and 2017 seasons. Alabama notched a 45-40 win in the first game, while Clemson countered with a 35-31 victory in the second.  The third meeting, in January 2018, wasn’t for all the marbles. However, it determined which of the two teams would advance to the biggest game of the season. Alabama won that rubber match by a 24-6 margin in the Sugar Bowl.

The Crimson Tide compiled the seventh-most passing yards per game (322.2). In turn, the Tigers allowed just 192.5 passing yards per contest, including 157.3 per game on the road. The latter figure is the fifth-lowest away total in the nation. Then, the Tigers’ offense often relied on their elite running game. Clemson rushed for 256.8 yards per game, 10th-most in the country. Yet, Alabama was among the best at stopping ground attacks. The Tide allowed a modest 109.2 rush yards per contest, 11th-fewest in the nation.

The Tigers were 8-6 (57.1 percent) versus the spread this season. Monday’s game marks the first instance this season in which the Tigers are underdogs.

The Crimson Tide were also 8-6 (57.1 percent) against the number this season. As is the case Monday, Alabama was a favorite in all of those games.

The Crimson Tide is considered the home team in Monday’s neutral site. Alabama is 4-3 (57.1 percent) against the spread as a home favorite this season, with all of those contests day games, as is Monday’s.

The Tigers were 4-1 (80.0 percent) versus the number as a road team this season. That includes a 3-0 mark against the spread in road day games. The Tigers have also covered the spread in eight of their last nine bowl games.

DraftKings, FanDuel and BetStars are offering value for Monday night’s Alabama vs. Clemson game in the form of odds boosts. Have a look below for the options in the New Jersey sportsbooks:

To make things more interesting, DraftKings Sportsbook is offering the chance to earn two times your winnings on your first live bet. Here’s how it works:

FanDuel Sportsbook is adding a little excitement to the biggest game of the season with its double your winnings promotion. Here’s how it works:

*Odds Are Subject To Change. Click Here To Get The Current Odds On This Promotion.

*Odds Are Subject To Change. Click Here To Get The Latest Odds From The BetStars NJ SportsBook.