In a weird and wacky hockey season defined by realignment and pucks lighting the lamps without fans in the stands, the Montreal Canadiens have defied the odds on their improbable run to the championship round. The Canadiens now face off against the defending cup champions Tampa Bay Lightning in the 2021 Stanley Cup Finals.

As the series begins, the Stanley Cup odds show the Lightning a -250 favorite and as high as -275 with a takeback on the underdog Canadiens of +220.

In a strange twist, the Canadiens are the first team from Canada to reach the Stanley Cup since Montreal won the title in 1993 over the Los Angels Kings and hockey legend Wayne Gretzky.

Some of the leading online legal sportsbook operators provided TheLines with comments, odds and updates on the Canadiens’ rise through the Stanley Cup Playoffs.

With the division realignment, four teams from each division made the playoff and the Canadiens had the fewest points (52) of the sixteen teams that qualified. With the COVID protocols and limited travel in place, all seven teams in Canada were placed into the North division as teams only played division games in the shortened 56-game regular season.

“The way the divisions were structured may have helped the Canadiens this year. It appears the Golden Knights were not as ready or prepared for them,” DraftKings Director of Race and Sports Operations Johnny Avello told TheLines.

“The Golden Knights were bet to win the series, and although we did well on most games, the Canadiens were hammered in a few games in the six-game battle,” Avello said. “They weren’t knocking the DraftKings door down to bet the Habs to win the Cup so we’re in good shape in the future book”

The Canadiens were +5000 to win the Stanley Cup prior to the season at DraftKings Sportsbook and BetMGM. When the playoffs started following the conclusion of the regular season, the Canadiens odds were:

“The NHL really is parity,” Nick Bogdanovich said prior to the playoffs. Bogdanovich is the Director of Trading and manages risk for William Hill US. “Anyone can beat anyone. You see nothing but games decided by one goal in these playoffs.” Bogdanovich told TheLines.

That was the case for the longshot Canadiens, who won three one-goal games against the Toronto Maple Leafs including two in overtime when trailing the series 3-1. Two more one-goal games were part of the four-game sweep over Winnipeg. Then Montreal pulled the biggest upset of the playoffs as a +400 series underdog to beat the Vegas Golden Knights in six games including three in overtime. Montreal won three games over Vegas by the score of 3-2.

Seven teams opened the playoffs with odds of +1200 or less led by Vegas (+350) and Colorado (+450). Other sportsbooks outside of Nevada with less risk on the Golden Knights had the Avalanche as the slight favorite as the playoffs started. Only the Tampa Bay Lightning (+700) made it to the finals from that group.

The Canadiens’ odds shifted dramatically in their opening-round playoff series against the Toronto Maple Leafs. Trailing the series 3-1, FanDuel Sportsbook was offering Montreal at odds of +15000 to win the Stanley Cup. After rallying to knock off the Maple Leafs, the Canadiens’ odds to win the cup shifted to +2400 prior to the series against Winnipeg and as low as +1600 at other sportsbooks. After upsetting Vegas, the Canadiens opened at +220 in the Stanley Cup FInals while the Lightning were -250 to win the series and repeat as champions.

Carey Price has been outstanding between the pipes for the Habs. But the close results show some of the variance and the puck-luck involved in hockey.

“The NHL is the most luck-driven league in pro sports,” Canadian professional bettor Brian Steinberg (Sherwood) told TheLines. Sherwood has extensive knowledge and understanding of the betting markets and has been betting and handicapping sports for more than two decades.

“The game itself features highly skilled players that make it one of the most entertaining events one will ever attend, but individual outcomes of each game comes mostly down to puck luck and variance.”

That was the case in the Canadiens’ 3-2 OT win in Game 3 over the Golden Knights after goalie Marc-Andre Fleury misplayed the puck late in regulation. 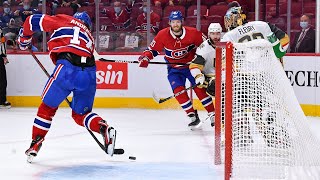 Sherwood noted that the Habs were sixth in the NHL during the regular season in CorsiFor% (a proxy for puck possession), and none of their three series wins have been flukes, despite the media perception and underdog role.

PointsBet told TheLines that more than 65% of the money was on the Canadiens’ opponents in all three series, which has provided PointsBet and most sportsbooks with very good results during the Stanley Cup Playoffs.

Cashing in on the underdog trend

The Canadiens are another recent major longshot to make it to the Stanley Cup finals. Vegas defied the odds at +30000 or greater to reach the finals in their inaugural season of 2017-18. Longshot St. Louis Blues won the Stanley Cup in 2019 after reaching +25000 during the season.

One bettor at BetMGM won’t have to wait to cash in on his futures bet on the Canadiens. BetMGM informed TheLines of a notable winning bet of $5,000 to win $150,000 on the Canadiens +3000 to reach Stanley Cup Finals.

Data, odds and percentages is also driving the futures market for Prop Swap, which provides a marketplace for bettors to buy and sell futures tickets.

Luke Pergande, one of the founders and partners of Prop Swap, told TheLines that one ticket on Prop Swap sold for $45 when the Canadiens trailed the Maples Leafs three games to one. At 221/1, the bettor who bought it stands to win $10,000.

Another bettor sold a Canadiens future ticket for $60, and the buyer flipped it on Prop Swap for $1,800. That second buyer is trying to sell it and is taking minimum bids of $4,200.

The Canadiens are providing many intriguing betting situations throughout the 2021 playoffs as they shoot to become another storyline to an unusual season.