While Eagles at Cowboys is unfolding to wrap up Week 3 in the NFL, TheLines lead betting writer Eli Hershkovich is chatting with sports bettors and answering your questions in our Monday Night Football chat room.

The chat has concluded. Join us next week!

The game will mark the 125th meeting in a series that the Cowboys lead by a 70-54 margin. The most recent game between the teams unfolded in Week 16 of the 2020 season, with the Cowboys notching a 37-17 home win, a game in which Philadelphia’s Jalen Hurts threw for a career-high 342 yards and added another 69 on the ground, while Dallas’ Ezekiel Elliott (105 rushing yards) and Amari Cooper (121 receiving yards) thrived for the winners.

The Eagles offense arguably took a step back in Week 2 against the 49ers after looking dominant versus the Falcons on the road in the opener. However, Hurts still managed to make up for a lackluster passing day with a strong 82-yard, one-touchdown effort on the ground. The Cowboys do present as a softer matchup for Philadelphia’s passing game than San Francisco, arguably by a wide margin – through two games, Dallas has allowed an NFC-high 346.0 passing yards per game and 7.6 yards per attempt, with both Tom Brady and Justin Herbert getting to them for 300-yard tallies. Hurts already demonstrated an ability to rack up numbers versus Dallas as a rookie, so he could certainly be poised for a prolific performance as a slightly more experienced quarterback at this juncture.

The Cowboys are down DeMarcus Lawrence on the defensive line due to a foot injury and had to resort to moving rookie Micah Parsons to defensive end against the Chargers in Week 2, but they’ve done a better job of stopping the run over a small sample thus far. The actual per-game numbers are drastically better through two games compared to last season – Dallas has yielded just 73.5 rushing yards per game – but the Buccaneers chose to go to the air heavily in Week 1 and Austin Ekeler logged a modest nine carries in Week 2. The Cowboys are also giving up 4.5 yards per carry and have yet to face anywhere near the caliber of running QB that Hurts is. 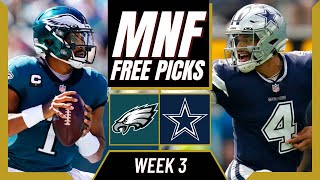