The All-Star Game is over but the biggest impact on MLB futures betting might have taken place the night before. Two rookies dominated the field in the Home Run Derby this year.

Pete Alonso of the New York Mets took the Home Run Derby crown. Meanwhile, while Vladimir Guerrero Jr. of the Toronto Blue Jays won our hearts slamming 91 dingers over three rounds. Not coincidentally, the two are among the favorites to win Rookie of the Year in their respective leagues.

After a late call up from the minor leagues and a slow start, Vladito is now only +700 to win the AL Rookie of the Year. He has the fourth longest odds behind a longshot and a player that wasn’t even available for betting at DraftKings when the season started. Brandon Lowe might not be a household name yet the Tampa Bay Rays second baseman is off to a great rookie year. Lowe’s 3.5 WAR is tops among American League rookies. His 16 home runs and .862 OPS during the first half of the season helped move his odds at DraftKings 14-1 start the season to 1.5-1 (+150) today.

Victor Robles of the Washington Nationals started the season as +250 favorite to win the National League Rookie of the Year at DraftKings. Despite a pretty good season he’s no longer among the top 5 favorites to win the award. Pete Alonso has been crushing dingers all season long for the New York Mets and is now the -200 favorite to win the NL Rookie of the Year. The “Polar Bear” has the most home runs and best WAR of all MLB rookies.

One of the most fun rookies all of baseball, Fernando Tatis Jr., is a distant second at DraftKings to win the Rookie of the Year with +275 odds. He missed more than a month of the season with a hamstring injury.

Home Run Derby was the highlight of the All-Star Break for many baseball fans. The quick pace and an unimaginable number of home runs helped raise the profile of rookies Vladimir Guerrero Jr. and Pete Alonso.

Here’s a recap of the event for anyone that may have missed the great Home Run Derby this year. 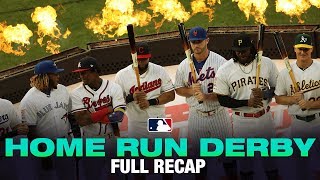 Past performance does not necessarily predict future results in any sport. Alonso and Lowe are the current favorites to win Rookie of the Year in the respective league. However, that doesn’t mean they’re a lock.

There are still more than 70 regular season games to be played by most teams. A big post All-Star break performance could bring another rookie to the forefront.