Week 14 NFL action featured a season-high eight road favorites, and many of those favorites took a majority of the betting action from recreational bettors. The results left many scratching their heads.

The biggest result that left bettors baffled was the New England loss at Miami, now known as the “Miami Miracle!”  The Dolphins (+9) covered the spread from start to finish against the Patriots. The game was clean with no turnovers, and New England led 27-21 at halftime after Tom Brady took a sack inside the Miami 10-yard line in the closing seconds of the 2nd quarter and the Patriots were unable to attempt a field goal.

Still, Patriots side bettors along with moneyline and teaser wagers on New England were still okay. But following a rare missed field goal of 42 yards by Patriots kicker Stephen Gostkowski midway through the third quarter, Ryan Tannehill completed four straight passes covering 69 yards including the 23-yards touchdown strike to Brice Butler to put Miami ahead 28-27. The Patriots responded with a pair of field goals in the fourth quarter including the latter after New England failed to score a touchdown from 1st and goal at the Miami 7 yard line in the final minute. Miami got the ball back at their own 31 yard line with 16 seconds left down 33-28, and then the Miami Miracle left the players and fans in mayhem. 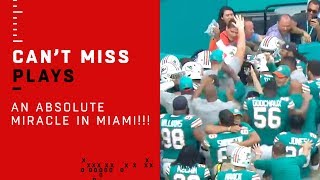 “A Miracle … Miraculous in Miami” is how the announcer described the Tannehill pass to Kenny Stills, hook-and-lateral to Devante Parker and shuffle to speedy running back Kenyan Drake, whose shifty moves and circling inside the 40-yard line led him to the end zone and the Miami Miracle.

Drake gets credit for a 52-yard touchdown reception after the wild hook-and-ladder walk-off touchdown. Miami is now 5-2 SU and 6-1 ATS against New England in the Patriots last seven visits to South Beach. Three times in the last four seasons Miami has beaten New England as at least a 9-point underdog. Tom Brady passed for 358 yards and 3 touchdowns in defeat, and New England had a week-high 35:14 minutes of possession time to 24:46 for Miami, and the Patriots ran 75 plays to just 45 for the Dolphins.

The desperation Dolphins score to complete the Miami Miracle keeps Miami (7-6) in the playoff chase and a 4-way tie for the final AFC wild card playoff spot with Baltimore (7-6), Indianapolis (7-6) and Tennessee (7-6). The LA Chargers (10-3) lead the AFC wild card chase, and Los Angeles has the huge Thursday night contest this week at Kansas City (11-2) with the AFC West division title still to be decided.

Week 14 started with Tennessee trouncing Jacksonville on Thursday night, 30-9. That result was a good start to the week for bettors as a majority of the bets were on the Titans, who were bet up from -4 to -5.5 at kickoff. Derrick Henry ran his way into the record books in the rout with a 99-yard touchdown run that featured multiple stiff-arms down the sideline on his way to tying Tony Dorsett’s record run from 1983. The Titans had a week-high 264 rushing yards in the victory to keep them in the AFC playoff chase. 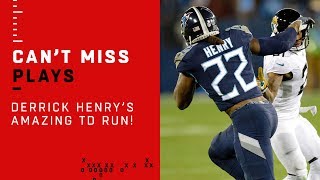 Sports Insights, which tracks sports bets from seven contributing sportsbooks, noted the highest moneyline odds tracked on the Dolphins was +820. That’s unusually high, and most sportsbooks closed Miami (+9) with Dolphins moneyline near +350.  Many sportsbooks had significant action on the Patriots with many moneyline bettors laying more than -400 and 60% of the side bets on New England.

The Sunday night feature in the freezing temperatures of Chicago saw the Rams (-3) go down to the Bears, 15-6. Los Angeles received 80% of spread bets and 75% on moneyline bets at FanDuel Sportsbook, costing many bettors more money as they chased losses on the Sunday night game. Under the total (51) received 56% of the bets at FOX Bet Sportsbook, so more bettors were rewarded betting for a lower-scoring result.

Other road favorites that took a higher percentage of bets that proved costly for more bettors included:

The most popular game of the week for bettors, according to SugarHouse, was the Bears vs. Rams matchup on Sunday night. That was followed by Cowboys vs. Eagles and Saints vs. Buccaneers.