The Final Four of the NCAA Tournament is set after the four remaining teams secured victories in four of the most closely contested Elite Eight contests in NCAA history.

Virginia is the lone No. 1 seed in the Final Four after a remarkable last-second sequence and two-point shot to force overtime before eliminating Purdue 80-75. Also on Saturday, No. 3 Texas Tech won a close contest 75-69 over top-seed Gonzaga in a tight tussle that was within 1-2 possessions the entire second half.

Sunday started with No. 5 Auburn quickly overcoming a 5-point halftime deficit and then going back and forth with No. 2 Kentucky before securing a 77-71 victory. No. 2 Michigan State completed the foursome in a heavyweight bout over No. 1 Duke 68-67 in another fantastic finish.

Texas Tech and Auburn are making their first-ever Final Four appearances in the NCAA Tournament. Virginia has also never won a national championship, and the Cavaliers return to the Final Four for the first time since 1984. Michigan State makes its sixth Final Four appearance since 2000 under head coach Tom Izzo, and the Spartans last won the national title in 2000.

Below are the spreads, totals, and moneylines for the Final Four games at DraftKings Sportsbook. Odds will be updated here all week.

Both national semifinals and the national title game will take place in Minneapolis at U.S. Bank Stadium and can be watched on CBS. They will also be available online at March Madness Live.

Top seed Virginia is now the favorite to win the national championship followed by Michigan State, Texas Tech and Auburn.

Entering the Sweet Sixteen, Michigan State (10-1) and Texas Tech (23-1) were still offering value in the futures market at FanDuel Sportsbook. Virginia (+425) was the second choice behind Duke. Auburn was offered at 30-1, and the Tigers are now the least likely to win the national championship without their most versatile player and facing an elite group of balanced teams with superior defenses.

How bettors have fared with these teams

Bettors did not believe in Auburn in their win over Kansas in the Round of 32 or in their Sweet Sixteen game against North Carolina. Only 12% of the moneyline bets and 29% of the spread bets were on the Tigers in their blowout win over the top-seed Tar Heels. Then playing without Chuma Okeke after he suffered a torn ACL in the second half against North Carolina, Auburn surprised bettors and fans again with an upset of Kentucky in the regional final with less than 46% of the spread bets and 43% of the moneyline bets on Auburn.

In the Texas Tech/Gonzaga regional final, Tech was supported with just over 42% of the bets but the money was nearly even. Sharp money moved the total up from 137 to 140, and those bettors were rewarded in Texas Tech’s 75-69 OVER the total win.

The money and tickets were nearly even in the Virginia/Purdue regional final which went to overtime and allowed Virginia (-4.5) to get the near-miraculous cover, 80-75. The Cavaliers took more bets in their non-covering win over Oregon in the Sweet Sixteen.

The common theme of the Final Four teams is experience. When the ball tips for the Final Four, there will be just two freshmen in the starting lineups between the four teams. 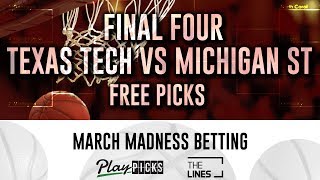 Michigan State (32-6) won the East Region as the No. 2 seed while going 3-1 ATS in the tournament. The Big Ten co-regular season champs and tournament champions started slow and actually trailed Bradley at halftime in the opening round before winning 76-65. Three straight covers followed in a comfortable 70-50 win over fellow Big Ten team Minnesota followed by a never-in-doubt trouncing of the LSU Tigers 80-63 as a six-point favorite. In the regional final, Michigan State closed a 2.5-point underdog in their 68-67 victory over Duke, holding the Blue Devils 16 points below their season average.

The Spartans boast one of the very best ATS records in the country this season at 27-11.

Michigan State has a Big Ten Player-of-the-Year senior point guard in Cassius Winston and strong balance inside and out. The Spartans have a NET ranking of No. 8, which is the NCAA Evaluation Tool that relies on game results, strength of schedule, scoring margin, net offensive and defensive efficiency, game location and the quality of wins and losses.

Michigan State ranks top-10 in adjusted offensive efficiency (5th) and defensive efficiency (8th). The Spartans are Kenpom’s No. 3 rated team and played the No. 2 strength of schedule in the country. The Spartans are the best shooting team (48.6% FG) and rebounding team left in the tournament and slightly ahead of Virginia as the nation’s No. 3 team in defensive FG% holding opponents to 37.8% field goal shooting.

Two outright underdog winners over Michigan and Gonzaga in the Sweet Sixteen and Elite Eight have sent Texas Tech to its first-ever Final Four.

Texas Tech is Kenpom’s No. 5 rated team with a suffocating defense that ranks No. 1 in adjusted defensive efficiency and No. 30 in offensive efficiency. The Red Raiders have a NET ranking of 10 and the lowest strength of schedule (35) ranking of the remaining Final Four teams.

Texas Tech has been perhaps the most consistent and impressive team in the NCAA Tournament, starting with its 72-57 win over Northern Kentucky. The Red Raiders then completely shut down Buffalo’s high-scoring 84-point-per-game offense in a 78-58 blowout and then buried Michigan as a 2-point underdog 63-44 holding the Wolverines to just 16 first-half points.

In the regional final against Gonzaga, the nation’s highest-scoring team with great strength and balance, Texas Tech showed their defensive strength and determination again to earn a Final Four trip with a 75-69 win.

Virginia (33-3) was the best team during the regular season and the Cavaliers won the ACC regular season title and are now 25-11 ATS. Virginia is 10-1 SU on the road and 8-1 on neutral courts.

The Cavs are 2-2 ATS in the NCAA Tournament, and after getting upset as a No. 1 seed in last year’s opening round by a No. 16 seed, top-seeded Virginia found itself trailing No. 16 seed Gardner Webb by six points in the opening round of this year’s NCAA Tournament. But from there it was a blowout with Virginia winning 71-56, and then the Cavs down Oklahoma 63-51 in the Round of 32.

Virginia is ranked No. 1 according to Kenpom, and the Cavs are the only team in the NCAA Tournament ranked top 5 in both adjusted offensive efficiency (2nd) and defensive efficiency (5th). Virginia has the No. 1 scoring defense in the country allowing just 55.4 points per game. The Cavs pack-line man-to-man defense dictates a slower-pace and knocks more athletic teams out of rhythm.

They will have to keep winning without their most versatile player after Chuma Okeke suffered a torn ACL in the second half against North Carolina. But Auburn’s up-tempo, push-the- pace attack is keyed by a dynamic backcourt of leading scorers Bryce Brown and Jared Harper.