Following a modest four-game slate Tuesday night, the NBA roars back in a big way Wednesday with a mammoth 11-game slate. Not only is their already some built-in intrigue due to the time of season it is, but the ledger also features a quartet of matchups between eight postseason contenders, helping offset three other games with double-digit spreads.

Hawks out to continue climb in matchup vs. Hornets: The Hawks have seemingly underachieved for most of the season relative to their expectations coming into the campaign. However, much like last season, Atlanta seems to be hitting its stride at the right time, as Nate McMillan’s squad has won eight of the last 12, including three straight. Trae Young, who’s coming off a 46-point, 12-assist double-double against the Trail Blazers on Monday night, will look to spearhead another victory in what could turn into a wire-to-wire affair versus the Hornets.

76ers try to bounce back from home loss: The 76ers have been underwhelming in their own right recently, losing three of their last five games, with the trio of defeats coming against contending teams. Philadelphia has another chance at a quality win Wednesday night in their visit to Cleveland, where they face a Cavaliers team they’ve already notched a pair of wins against in as many games this season. On paper, it’s a matchup of strength vs. strength in terms of home/road splits, as Philly’s 22-11 road mark is countered by Cleveland’s 21-11 home record. Oddsmakers are giving the edge to the visitors, which head into Wednesday as 4-to-4.5-point road favorites.

Blistering-hot Mavs visit Kyrie-less Nets: A club that isn’t having any trouble stacking up victories at the moment is the Mavericks, which have prevailed in 13 of the last 16 games. Dallas’ latest triumph was an impressive 95-92 win over the Celtics at TD Garden on Sunday afternoon, and they face another interesting test Wednesday. The Nets, which saw Kyrie Irving put up 60 points against the Magic on Tuesday, will host Luka Doncic and company without their star point guard since New York’s vaccination policy remains unchanged. While Kevin Durant will be available for Brooklyn, t’s notably Dallas that’s a narrow 1.5-point favorite as of early Wednesday.

Bulls try for rare quality win in visit to Utah: The Bulls’ 41-27 record all but locks in a postseason spot for them already, but their performance against fellow contenders has to give even die-hard Chicago faithful concern. Billy Donovan’s squad has lost six of its last eight, a stretch during which they’ve dropped decisions to the 76ers, Bucks, Hawks, Heat and Grizzlies. What’s more, the Bulls are coming off a listless defeat at the hands of the lowly Kings on Monday night, and that recent body of work goes a long way toward making them six-point road underdogs to a Jazz team that has a 24-11 record on its Vivint Arena home floor.

Celtics get major road test in Golden State: Their aforementioned narrow loss to the Mavericks aside, the Celtics have been one of the NBA’s hottest teams for the better part of the last two months. Boston has lost just four times in the last 22 games, a stretch that includes a 9-2 mark on the road. The Warriors will present a significant test for Jayson Tatum and company Wednesday, however, as Golden State has regained its footing after a rough patch with four consecutive wins and boasts a 29-7 record at Chase Center.

In this article, we highlight our best player props for the given NBA slate and link to The Coast 2 Coast Podcast, featuring Nate Weitzer and Josh Lander, which is brought to you every weekday by TheLines and PlayPicks. 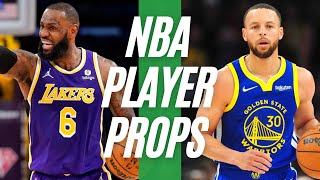 Now that Draymond Green is back on a limited basis, Steph Curry can be targeted with more confidence. Curry dropped 47 points with a 38% usage rate in Green’s return on Monday and 41 of those points came during the 20 minutes that Green played. With Green since last season, Curry is averaging 30 PPG and shooting 41% from 3-point range, compared to 24 PPG and 35% without him. He’s averaging 38 PPG and 7.7 3-pointers per game over his last three meetings with Boston, so it’s worth getting the +164 odds at FanDuel Sportsbook for him to hit five triples tonight. Take the over on his scoring prop (25.5 points) with confidence.

With John Collins (finger) out over Atlanta’s last two games, Trae Young has gone off for 46 and 47 points. He’s now averaging 40.8 PPG, 9.4 APG, and hitting 4.4 3-pointers at a 50% clip over his last five appearances without Collins, as that opens up the spacing for the Hawks’ offense. Young has hit 12 threes at a 48% clip in two meetings with Charlotte this season and he’s getting amazing +120 odds to hit just three triples tonight in a game with a 240-point implied total. Consider taking the +560 odds at FanDuel for Young to hit five triples in a win, or take the over on his scoring prop (29.5 points) as he faces a Hornets team that is giving up 120 PPG over their last five games.

It can be tricky to bet on spreads and totals in the NBA, where games go down to the wire and crazy things can happen to swing the line in either direction.

Sometimes bettors can find more value, and feel more confident when picking player propositions instead of betting on game results. A player prop refers to a wager on the performance of a single player, typically to go over or under a certain amount of points, rebounds, assists, or some combination of those statistics.

There are also team props that involve the scoring and production from entire teams, and some sportsbooks — with FanDuel leading the charge — offer Player Performance Doubles that incorporate player props into team results.

For example, a common offering would be for DeMar DeRozan to score 25-plus points in a Bulls win at +200 odds. This gives extra juice to a moneyline that might otherwise offer -105 odds or worse on the Bulls winning without DeRozan hitting his player prop.