The College Football Playoff is here, and it’s time to put up or shut up. Heisman winner Joe Burrow and the No. 1 LSU Tigers are looking forward to their first Playoff berth against Heisman runner-up Jalen Hurts and the No. 4 Oklahoma Sooners. The Peach Bowl is just one of two incredible matchups in the race for a spot in the National Championship.

We’ll be taking a look at this semifinal matchup in-depth, complete with a guide on how to bet this game. How has the line moved since opening? How is the public betting? What matchups will change the course of this game?

LSU sits as hefty 14-point favorites over the Sooners, a 3.5-point move toward LSU since the line opened. This means sharp bettors (those who are betting big money) came in early on LSU to cover. For a semifinal between two potent offenses and question marks on defense, a 14-point spread is generous for those looking to bet Oklahoma. You can anticipate the line moving back toward Oklahoma as sharp bettors wait for their chance to take the other side. This line won’t move as drastically as it has, but a closing line of Oklahoma (+13.5) wouldn’t be outlandish.

The Sooners moneyline is a longshot in this one, and that number isn’t likely to change, regardless of the line. Though not impossible, a straight up upset of LSU would be exactly that – a huge upset. The over/under is set at 76, the highest of any bowl matchup this season. Oddsmakers, like much of the country, are anticipating a high-flying game with an implied score of 45-31. This season, the teams played in games that surpassed 75 points ten times, but just once against teams ranked in the final top 25 (LSU vs Alabama combined for 87 points).

LSU vs. Oklahoma by the numbers

For fans of points scored, this is the game for them. Oklahoma ranks second in total offense, only bested by their opponent, LSU. LSU (47.8 ppg) edges Oklahoma (43.2 ppg) in scoring offense and passing efficiency. Bottom line, there’s no questions about either team’s offense; the game is going to come down to defense.

One of the most important metrics when it comes to considering these teams is their team passing efficiency defense. LSU (10th) is clearly superior in the stat to Oklahoma (48th) on paper, but when you consider average team passing efficiency faced (vs Power 5 opponents), Oklahoma (51st) has faced more efficient teams than LSU (71st). However, LSU has faced two top-15 passing teams (Alabama, 2; Florida, 15), while Oklahoma has faced none.

Both teams boast a capable rushing offense to complement their air attack, with the Tigers ranking 21st in rushing touchdowns (29) and Oklahoma ranking 12th in rushing yards per game (251.2).

The two players everyone is talking about are unquestionably the X-Factors in this ballgame. Star quarterbacks Joe Burrow (LSU) and Jalen Hurts (OKLA) were both Heisman finalists, with Burrow winning the award. LSU wide receiver Ja’Marr Chase lead the nation in receiving yards (1,498) and receiving touchdowns (18) as just a sophomore. The Sooners counter with star defensive back Tre Brown, who allowed a paltry 39.6 passer rating when targeted in the Big 12 Championship game (per PFF).

On the other side, CeeDee Lamb poses a massive threat to LSU’s talented secondary. Lamb is projected top-10 NFL prospect, averaging over 20 yards per reception (7th), and piling up 1,208 receiving yards (7th) and 14 touchdowns (3rd). LSU fields All-American freshman Derek Stingley (90.1 rating by PFF) and All-American safety Grant Delpit (8th ranked NFL prospect by CBS Sports). Oklahoma’s All-American linebacker Kenneth Murray went down with an injury in the Big 12 Championship game, but there doesn’t seem to be any doubt he’ll be ready for the semifinal. The Sooners will need Murray healthy, as LSU junior running back Clyde Edwards-Helaire (PFF’s All-SEC first team RB) has been wreaking havoc on defenses all year.

If LSU can get Edwards-Helaire going early, Oklahoma is in trouble. No doubt Sooners’ head coach Lincoln Riley has a game plan for the back, but Oklahoma’s defensive line ranks just 65th in standard line yards according to Football Outsiders (defined as, “The raw, unadjusted per-carry line yardage for a team on standard downs”). Conversely, LSU ranks 8th in the same metric on the offensive line. The Tigers have a heavy advantage here and coach Ed Orgeron will look to exploit this.

Riley is one of the best offensive minds in the nation, leading the Sooners to three top-overall rankings in offensive efficiency while leading the offense since 2015 (4th overall this season). Riley’s also turned three consecutive transfer quarterbacks into Heisman finalists, including two straight winners in 2017 and 2018. He has been rumored with some NFL teams (notably the Cowboys and Browns), but it doesn’t seem like Riley will be going anywhere anytime soon.

Orgeron was awarded the National Coach of the Year award, and rightfully so. But the real star of the show in Baton Rouge has been assistant Joe Brady, who took the Tigers from 29th in offensive efficiency in 2018 to first, and the 32nd-ranked scoring offense in 2018 to the 3rd. Brady’s transformation of the offense is unprecedented and has lead LSU to a #1 ranking.

This is the third meeting between the Sooners and Tigers (1950 and 2004), with each team taking a game. A major fallacy in college football is to compare common opponents, though each team beat Texas by seven points.

LSU (13-0) has exceeded everyone’s expectations this season– even Vegas’; the Tigers are 8-3-2 against the spread (ATS) this season, including 2-0 at neutral sites this year. Oklahoma (12-1) scrapped its way down the stretch, finishing 5-8 ATS this season (including twice against Baylor in the final four games). This is a battle between a team that keeps games close (Oklahoma) against a team that consistently blows its opponents out (LSU). In this case, it’s wisest to use the previous statistical information to make a pick against the spread.

The case for both sides

Why LSU can win

The Tigers don’t need much arguing to be favorites in this game. Their offensive front is statistically superior to Oklahoma’s defensive front against stiffer competition (three top-25 defensive lines faced vs one). LSU tops Oklahoma in almost every statistical category and boasts four AP All-Americans. They have the side of the sharp bettors and the public opinion. LSU should win this game.

Why Oklahoma can win

For every statistical deficit, Oklahoma makes up for with experience. The Sooners are playing in their third College Football Playoff (0-2 in previous games), while LSU is playing in its first. Riley and his team can also play the underdog card, similar to Ohio State in 2014-15, and no top-overall seed in the Playoff has won the National Championship (3-2 in semifinal games). While not blowing teams out, Oklahoma has won when necessary, clearly learning from its loss to Kansas State earlier in the year. LSU has yet to have “that game” where it slips up, and this seems like it could be a prime game for that slip up to happen. 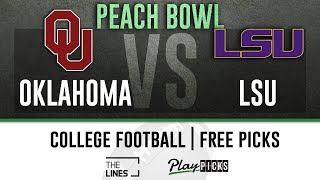