After 17 weeks of football and a wild semifinal weekend, the National Championship game is set; the LSU Tigers (14-0) and Clemson Tigers (14-0) have proven themselves to be the two best teams in college football.

Both teams proved dangerous and audacious in different ways, making for an incredible matchup come January 13. Clemson is fighting an uphill battle, though, as LSU gets the National Championship game in their own backyard (New Orleans)– the fourth such time since 2000. Clemson also enters the game as underdogs for the first time all season.

With two indistinguishably great teams, how does one go about betting accurately? This guide will serve as a breakdown of the odds, where the lines are expected to move, the key personnel matchups, statistical breakdown, and some tips on betting the over/under.

LSU opened as 6.5-point favorites over Clemson. At least two of the points given is likely a pseudo-home field advantage (typically handicapping a team three extra points) since the game will be played just an hour from LSU’s home stadium. At a more neutral site (ex. in Arizona), LSU would be favored by 3.5 to 4 points, likely. With such a steep spread in favor of LSU at open, bettors have seen this line move back toward Clemson as money rolled in leading up to kickoff.

The point spread should settle between LSU -4.5 and LSU -5.5. After LSU dropped 63 in the semifinal, Vegas set the over/under of this game at 70, with an implied point total of 38.5-32. The number dropped slightly to 68 as of Sunday evening. LSU has been held under 38 points three times (under 35 just once); Clemson failed to reach 32 points three times (including semifinal game).

LSU vs Clemson by the numbers

Through the semifinal games, LSU sits atop the nation in scoring offense (48.9 ppg) and total offense (564.2 ypg). Clemson sits first in scoring defense (11.5 papg) and first in passing defense (151.5 yapg), making this the ultimate bout between the best offense and defense in the nation. Clemson has allowed just one 300-yard passer (Justin Fields, Fiesta Bowl), and one more over 250 passing yards (Bryce Perkins, ACC Championship game). Joe Burrow surpassed 275 yards passing in every game and was held under 300 yards just twice (vs Louisiana-Lafayette, vs Florida).

This game is undoubtedly about the two superstar quarterbacks. Joe Burrow was a cheat code all season long, but never more than against Oklahoma – dishing out seven first-half touchdowns and making some absolutely impossible throws. Burrow re-claimed his Heisman with several viral highlights and made Oklahoma’s defense look nonexistent. Against this Clemson defense, Burrow is going to have to repeat that magic, much like he did against Alabama earlier in the year.

Trevor Lawrence re-established himself as a killer in the Fiesta Bowl. Despite having less gaudy numbers than his freshman season, he managed to break Ohio State with a 67-yard touchdown run and leading a four-play, 94-yard drive to ice the game. Lawrence is one of the best draft prospects in decades and consistently plays at another level in high-pressure, high-stakes games.

Outside of the quarterback play, LSU will need running back Clyde Edwards-Helaire to be healthy and carry the load; Ohio State running back JK Dobbins showed that Clemson is susceptible to chunk-play rushing. LSU boasts two All-Americans and three All-SEC defensive, a corps that will need to play it’s very best against Clemson’s lethal gang of wide receivers. The story is unchanged for the other side, as Clemson’s defensive backs face the nearly-impossible task of containing LSU’s dangerous receiving corps.

The coaching in this game needs no introduction– National Coach of the Year Ed Orgeron and assistant of the year Joe Brady take on two-time National Champion Dabo Swinney. Both groups have proved more than capable, though the edge has to go to Swinney and his crew. For fans of great football and great coaching, this is the game for you.

Betting breakdown: the case for both sides

Why LSU can win

After hanging 63 on Oklahoma and watching Joe Burrow go supernova, LSU has proved it is ready for anything. The nation’s best offense and an immensely talented defense have bested #9 Texas, #7 Florida, #9 Auburn, #2 Alabama, #4 Georgia, and #4 Oklahoma thus far – maybe the most daunting schedule in recent football memory. This season, LSU has been there and done that. The bigger question than if LSU can win the title is, Can anyone stop LSU? Nearly touchdown favorites and playing in their own backyard, LSU is in a prime position to dethrone Clemson and win their first title since 2007.

Why Clemson can win

Clemson’s no stranger to being the David against the SEC Goliath; they thrive in that position. Dabo loves being the underdog and his team rises to the occasion every single time. LSU is just the next in line to be upended by Trevor Lawrence. After overcoming a 16-0 deficit in the Fiesta Bowl and making sound halftime adjustments, Clemson proved they cannot be wavered. Clemson feels good about its chances on each side of the ball and will be looking for their third title in four years.

Somehow, Clemson has been undervalued all season long, posting an astounding 11-3 against the spread this season. LSU has also exceeded expectations, posting a 9-3-2 record ATS of their own. Due in part to their defense, Clemson is just 6-8 against the over this season, while LSU is 9-5 (also due in part to their defense). Worth noting, LSU is 3-0 ATS at neutral fields, including the SEC Championship game (37-10 vs Georgia) and the Peach Bowl (63-28 vs Oklahoma).

As always, common opponents are incredibly misleading in college football, but Clemson beat Texas A&M 24-10 in Week 2 of the season (A&M scored with 0:10 left to go in the game, otherwise was 24-3). LSU dismantled Texas A&M 50-7 in their final regular season game. All-time, LSU leads Clemson 2-1, but Clemson took the most recent matchup in 2012 (25-24); before then, LSU won in 1950 and 1996. These records are worth noting, but should not be considered when placing a bet – treat each game independently.

The winner of this game will be just the second team ever to go 15-0 (2018 Clemson) and rightfully claim the title of “Death Valley.” No matter the outcome, this will be a historic game.

Watch below at Matt Perrault offers his thoughts on the spread, moneyline, total, and props for LSU vs. Clemson. 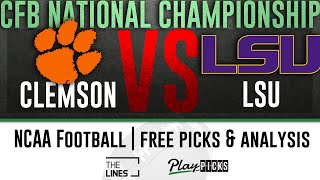