The Lakers began their title defense in the first NBA play-in tournament in league history, defeating the Golden State Warriors to earn the 7-seed in the Western Conference. Despite being one of the last two teams in the playoff bracket, Lakers odds for their series against the Phoenix Suns opened at an eye-popping price.

At the online event BETFEST, Jeff Sherman, VP of Risk Management at the WestGate SuperBook in Las Vegas, told attendees the Lakers would likely not only be favored in the first round but heavily favored.

“We’d have the Lakers as a sizable favorite against Phoenix, about a -250 favorite in that first-round series,” Sherman projected before the play-in game.

Sure enough, a sizable favorite they are. Los Angels opened at William Hill sportsbook as a -300 favorite to win the series against the second-seeded Suns.

That may not sound all that surprising to basketball fans and bettors alike, considering how much money has been bet on the Lakers to repeat this year, but it’s historic. Nothing has ever come close to that price for a seven seed. It’s unprecedented in NBA playoff betting history.

According to Sports Odds History, only seven lower-seeded teams have ever been favored in the first round of the NBA playoffs (records date back to 1969). Not one of those teams was a 7-seed or 8-seed, like the 2021 Los Angeles Lakers.

Below are the previous seven instances of teams in the opening round still being the betting favorite in the series, despite facing a higher seed. The table is sorted by the largest favorites.

Looking back over the past eight years of first-round playoff series pitting top seeds against eight seeds and two seeds against seven seeds, the first thing that stands out is obvious. Most one and two seeds were enormous favorites in the opening round.

Scouring the vast reaches of the web for past Las Vegas and legal online sportsbook data got us as far back as 2013. Not only was every seven and eight seed an underdog, but only four were shorter than +300 to win their series. All were seven seeds, and all lost.

Here is the full list of series prices for seven and eight seeds since 2013 in the NBA playoffs, sorted by year. 2020 and 2019 underdog prices provided by DraftKings Sportsbook.

We’ve never seen anything like the respect the Lakers are getting from oddsmakers in the 2021 NBA playoffs.

NBA Futures prices to win the championship have Los Angeles as the second choice behind the Brooklyn Nets. Those odds have changed from the preseason when the Lakers were the favorites, but not much has changed in those odds with the Lake Show still garnering a sizable portion of the handle across legal sportsbooks.

The first-round series price is different though. That price is not affected by the money already wagered on the Lakers to win the NBA championship. The opening price, however, is affected by perception. COVID-19 has turned this regular season into one we have not seen. More games were smashed into a shorter period of time. That led to more stars sitting out games, and injuries leading to more missed games. Los Angeles is still the defending champion, and its two stars, Anthony Davis and LeBron James, appear to be healthy enough to play to start the playoffs. The win over the Warriors was certainly evidence of that.

All of these factors combine to create Lakers odds, specifically a first-round series price, that does not match their playoff seed historically. So when you are watching LA try to repeat as NBA champions, realize you are quite literally watching the most respected seven or eight seed in NBA history. 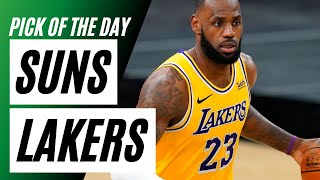