The 147th running of the Kentucky Derby takes place at Churchill Downs in Louisville, Kentucky on Saturday, May 1st. This year’s race appears to have several legitimate contenders for those looking to place Kentucky Derby bets.

Legendary Triple Crown trainer Bob Baffert’s Life Is Good is off the Derby trail with an injury. With the potential Derby favorite out, that leaves a battle at the windows to see who emerges as the new favorite in this 20-horse field. Baffert has also removed Concert Tour from Derby consideration, pointing him towards the Preakness.

TheLines.com managing editor Stephen Andress along with horse racing contributors Fairway Jay and Dave Bontempo assembled their top-10 contenders for this year’s run for the roses. Together, their three ballots form our Kentucky Derby Power Rankings.

They also answered a few questions on which horse they see as the favorite, which horse is a live longshot, and what important factor do they weigh when handicapping horse racing and locking in Kentucky Derby bets:

Essential Quality gains a minuscule edge over Highly Motivated and Rock Your World because of his strong finish at the Blue Grass Stakes. Not only did he outlast the stubborn Highly Motivated but ran two seconds faster than Rock Your World in the final three furlongs of the Santa Anita Derby. This could bode well for him stretching to a mile and a quarter for the Kentucky Derby.

Can’t be prohibitive because of the narrow victory margins over Highly Motivated and Hot Rod Charlie in the Breeders Cup last year, but this horse is seasoned and versatile. Rock Your World has won on turf and dirt and has a big chance to improve. So slight is the preference for Essential Quality that boxes and superfecta keys highlighting all these horses will be the overall betting strategy.

I have my eye on Hot Rod Charlie if the price is right, who went gate-to-wire and didn’t need the whip in the stretch to win the Louisiana Derby; however, Rock Your World should be the favorite. He really impressed me in the Santa Anita Derby. No other horse in this year’s Derby field has posted a triple-digit Beyer Speed Figure (more on what that means below). Rock Your World earned a 100 Beyer in his 4 1/4-length victory over Medina Spirit on April 3rd. He won by a large margin and did so despite setting fast early fractions. Rock Your World got out in 22.42 in the first quarter mile, 46.11 at the half mile pole, and 1:10.64 at three quarters. I share Dave’s concerns about Rock Your World’s time down the stretch and stretching out to 1 1/4 miles, but I have yet to see a horse in this field post early fractions that fast and still go on to win in impressive fashion.

Rock Your World is unbeaten in three tries as a three-year-old. He did not race as a two-year-old, which had been the kiss of death in the Kentucky Derby for a long time until recently. In 2018, Justify became the first horse since Apollo in 1882 to win the Derby without having raced as a two-year-old. He also won the Preakness and Belmont to capture the Triple Crown. In this era of more lightly-raced horses, it can be done. If Rock Your World improves again on the first Saturday in May, he will be tough to beat.

There will be a solid favorite in the race in undefeated Essential Quality, who is five-for-five after winning the Blue Grass Stakes in early April; but the champion two-year-old is not my favorite or pick to win the 2021 Kentucky Derby. I’m sticking with Todd Pletcher-trained Known Agenda. I’ve been riding him since the new year started, and he flashed a major buy sign in an 11-length Allowance win in early March. He then went on to win the Florida Derby with a strong late burst and turn of foot heading for home. He pulled away for an impressive win and strong 112 Equibase Speed Figure. As a son of Hall-of-Famer Curlin, Known Agenda should continue to improve and only grow stronger as he matures and shows us his versatility and speed.

Who is one longshot you have your eye on right now? Do you think he can win, or do you just like him to hit the board?

Longshots are definitely worth adding to your vertical and horizontal wagers in the Kentucky Derby. I hit the 2017 winner Always Dreaming (9/2) as a favorite, but singled him on top of a number of longshots in the exacta and trifecta. Those second- and third-place finishers had odds of 33/1 and 40/1 to trigger huge payoffs.

I’ll be digging deeper into potential longshots to add, and others to toss as the race nears. But for now, Sainthood will be a big longshot who could hit the board. He’s lightly raced, and also trained by Todd Pletcher. In his stakes debut and third start, Sainthood finished a close second in the Jeff Ruby Steaks to secure his spot in the Kentucky Derby. A closer look at that 1 1/8 mile races shows Sainthood encountered lots of traffic trouble at the top of the lane. When he finally found clear ground on the synthetic surface, he came charging late. The large Derby field can create traffic trouble for horses, but Sainthood looks like he may relish the added distance and dirt as he improves. He’ll definitely be a big longshot and overlooked, but could surprise if he gets a cleaner trip and a faster pace to show off his late kick and Run for the Roses.

Super Stock. He reversed a multi-length loss to Concert Tour in the Rebel Stakes to decisively beat him down the stretch in the Arkansas Derby. You love to see improvement like this in a young horse. Super Stock was 38-1 for the Rebel Stakes and 12-1 for the Arkansas Derby. What if he takes another quantum improvement leap? He would be a Kentucky Derby bets threat if he did and I’d give him a chance to win.

He’s a more realistic choice than Bourbonic, who nonetheless merits a hit-the-board flier from me. Bourbonic not only came from dead last, but another zip code, to become the 72-1 longest-shot-ever to win the Wood Memorial. The time was slow and this group did not look like the top Derby contenders. Furthermore, his late running style doesn’t fit the Derby. But could he run late for fourth? Why not, he’ll be a bomb.

I think it would be unwise to leave Midnight Bourbon off of your exotic tickets. His daddy, Tiznow, won the Breeder’s Cup Classic twice, and his very experienced son has never finished worse than third in seven career races. His most recent second-place finish behind Hot Rod Charlie in the Louisiana Derby still earned him a 96 Beyer Speed Figure. That makes Midnight Bourbon just one of five horses in this field to post a 96+ Beyer in their final Derby prep race. Experience matters even more in a 20-horse field. Some horses have never been in traffic. Some have never had dirt kicked in their face. Midnight Bourbon will be ready.

What’s one important factor you weigh when handicapping the Derby and its unique 20-horse field?

It is so hard to determine by the eye test which horses ran best across various tracks in Derby prep races and then pick the best among them in a 20-horse field. Beyer Speed Figures have always been a fantastic way to offset bias when handicapping a race. They were designed in the early 1970s by Andrew Beyer, then a horse racing columnist for The Washington Post and now the Daily Racing Form. Overall, the number reflects both the winning time and the inherent speed of the track over which it was run. Triple Crown champion American Pharoah’s best Beyer was 120. It is damn near impossible to win the Kentucky Derby without posting a 100+ Beyer. It has also proven extremely difficult to improve enough from a high 80s or low 90s Beyer in your final Derby prep race to reach a triple-digit Beyer on the first Saturday in May.

This year, five horses in the Derby field posted a 95+ Beyer in their final prep race: Rock Your World (100), Hot Rod Charlie (99), Essential Quality (97), Highly Motivated (97), Midnight Bourbon (96). If it appears the Derby will be run on a dry, firm and fast track, this is where I start in trying to pick a winner.

In evaluating the Kentucky Derby runners, I often reference final fractions in their final race or two before the Kentucky Derby. You like to see an improving colt getting stronger, and those that run a final 3 furlongs in 38 seconds or less. It’s been a proven theory with 18 of the last 23 Kentucky Derby winners coming home in 38 seconds or less in their final Derby prep. Last year’s winner Authentic was not one of them, however, so the projected pace of the race, and a horses pedigree and ability shown in 1 1/8 mile races leading up to the 1 ¼ mile Kentucky Derby is also a factor to evaluate when handicapping the field.

Pace and positioning. Rock Your World survived blistering early fractions in the Santa Anita Derby, but pulled away impressively after the speed duel. Is he a one-dimensional speed bullet, the way Maximum Security was perceived before the 2019 Derby? Or can he be rated? Look out if he can be. If the pace is close to 47 seconds at the half-mile and he’s right there, he’s a major threat.

We’ll see contenders using their horses early, trying to clear traffic problems in this unusually large field. They will hope to steal a breather somewhere along the backstretch. Eventual winners are usually close to the pace early, so tactical speed will be important. A stalker can win the Derby, but a late closer often won’t. Once pace and positioning are properly used to put a horse in the right spot at the top of the stretch, we discover the intangible of which horse can get the mile and a quarter in a field that has never run that distance.

Bonus Coverage: Fading Todd Pletcher Horses Has Paid Off in the Past 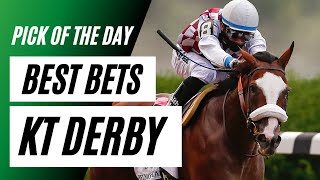