The biggest American race of the weekend on the road to the Kentucky Derby is at Gulfstream Park, where 12 3-year-olds are entered for the Florida Derby (Grade 1). The top four finishers earn points (100-40-20-10) toward qualifying for the rescheduled Kentucky Derby on Sept. 5. The winner secures a spot in the starting gate for the Run for the Roses.

Gulfstream Park plans to run races this weekend despite Broward County’s ban on nonessential business and the city of Hallandale Beach asking the horse racing track to shut down and postpone the Florida Derby.

Last week’s Louisiana Derby winner Wells Bayou also went gate to wire and was bet down sharply to 3-1 after opening at odds of 8-1. Trainer Brad Cox saddled both Wells Bayou and Fair Grounds Oaks winner Bonny South (6-1), who upset the 2-5 heavy favorite Finite to secure her spot in the Sept. 4 Kentucky Oaks at Churchill Downs.

A perfect day of racing is scheduled for Saturday, March 28, with sunny skies and low 80s temperatures in Hallandale Beach for the 1 1/8-mile race. A total of seven graded-stakes races are scheduled, but Gulfstream Park was forced to drop purses by 20% to $1.55 million from $1.95 million. The loss of on-track handle and revenue from the track’s casino due to the COVID-19 pandemic forced the track to close live racing to all fans since March 13 and the casino closure on March 16. The Florida Derby purse took the biggest hit from $1 million to $750,000. Florida Derby Day will be run ‘spectator free’ at Gulfstream Park with no patrons and only essential employees, licensed horsemen and owners, and credential media in attendance.

The Florida Derby (G1) drew a field of 12 for the prestigious race. The winner will receive an adjusted share of $535,000 and 100 Derby points. The winner will earn enough points to secure a spot in the starting gate for the rescheduled 2020 Kentucky Derby on Sept. 5. The Florida Derby runner-up may also secure a spot with 40 Derby points added to their total.

Breeders Cup Promo - Get Up to $200 Back If Your First Bet Loses
1
Visit TVG
$200 Bonus
If Your Bet Loses
TVG Review
Get Your First Single-Horse Win Wager Back
Up to $200 If You Lose
Use Promo Code: 200TVG
BET NOW

How to bet the Florida Derby

The best place to bet on this weekend’s races is on the TVG racing app, where you’ll receive a risk-free bet of up to $300 when you make your first deposit. That means if you lose your bet, you’ll get refunded in the form of a free bet bonus. The bonus must be used within 30 days of the conclusion of the race.

Be sure to check out the Gulfstream Park Oaks (G2) in Race 11. The 12-horse field for 3-year-old fillies will race 1 1/16 miles for a $200,000 purse with the winner gaining entry into the Sept. 4 Kentucky Oaks. The favorites include Tonalist’s Shape, who has won all five of her career starts and is by 2014 Belmont Stakes winner Tonalist.

TVG offers an iOS app for Apple devices and a sleek browser site for Android users. If TVG is legal in your state, you can place your bets right on your phone, tablet or personal computer and follow the action online.

Sign up for TVG and get your risk-free bet today

However, one of those winners was 2020 Fountain of Youth champion Ete Indien, who was able to break sharply and get to the lead from post No. 11 and win wire-to-wire by 8½ lengths. This field has more speed to challenge, making it tougher on the outside horses.

Favorites Tiz the Law (6-5) and Ete Indien (4-1) will battle again with Independence Hall (9-2) and Gouverneur Morris (8-1) as the contenders by the opening odds.

Trainer Todd Pletcher has won five Florida Derbys, including four of the last six. He has Fountain of Youth runner-up Candy Tycoon entered as a closer to watch along with Gouverneur Morris, who makes his debut at Gulfstream and is 2-for-3, having finished a distant second in the Breeders’ Futurity (G1) last October just ahead of Enforceable. Gouverneur Morris won an allowance claiming race last month at Tampa Bay. Jockey John Velazquez will ride Gouverneur Morris, and Velazquez has won a record five Florida Derby’s including three of the last four while finishing in the money in all eight of his Florida Derby starts since 2009.

Tiz the Law will take a majority of the wagering action to win as a favorite. He’s 3-for-4, including a three-length win last out over runner-up Ete Indien, who breaks from the far outside Post 12 in the Florida Derby and will have a tougher time getting to the front and inside as his preferred front-running style.

The courageous Barbaro remained undefeated following a fantastic finish and neck-and-neck stretch run with Sharp Humor in the 2006 Florida Derby. 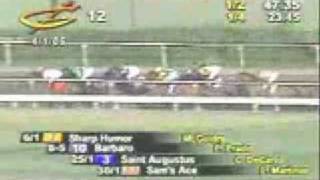 So with those trends in place, you’re advised to focus on the favorites and key contenders for the 2020 Florida Derby and which horses have some familiarity with the surface and track. Note too that 11 of the past 14 Florida Derby winners also won their previous race, and three of the horses in this year’s Florida Derby are coming off a win while five others were runner-up in their last race.

The 2018 and 2019 Florida Derby’s did not produce a Classic champion, but Florida Derby runners have gone on to win 59 Triple Crown races, including 24 Kentucky Derby’s, 19 Preakness Stakes and 16 Belmont Stakes. Caesars Racebook Launches On Android Ahead Of Breeders’ Cup