While Colts at Ravens is unfolding to wrap up Week 5 in the NFL, TheLines lead betting writer Eli Hershkovich is chatting with sports bettors and answering your questions in our Monday Night Football chat room.

The chat has concluded for the evening.

The Indianapolis Colts and Baltimore Ravens will face off at M&T Bank Stadium for an AFC showdown on Monday, Oct. 11. The game will mark the 17th meeting in a series that the Colts lead by a 10-6 margin. The most recent game between the teams unfolded in Week 9 of the 2020 season, a 24-10 road win for Baltimore.

The spread for this conference battle opened at Ravens -6.5 in the early-look line and has firmly toggled between that figure and 7 since that point. It is current set at Ravens -7. Baltimore narrowly escaped with a one-point win over the Chiefs in its only home contest thus far, but the Colts are just 1-3 and count last week’s victory over a short-handed Dolphins squad as their only win. Meanwhile, their average margin of defeat in their three losses has been 8.0 points, and they lost to Baltimore by 14 points last season with Philip Rivers under center.

In contrast, the projected total for this contest has been on the move since the open by a much wider range. Notably, it’s been on a steady downward trajectory. The number was set at 50 upon initial release, but after the Colts and Ravens actually combined to score that amount in Week 4, that figure began to get bet down. It was soon at 48 and crept as low as 45. It is currently at 46.5. 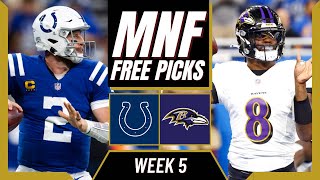