Over the next week, there will be college hoops on by noon EST every single day. Welcome to Feast Week, and let’s tip it off with my college basketball best bets for Notre Dame vs. Saint Mary’s in the Maui Invitational.

Click on the odds below to bet now. You can also continue the discussion in our betting community, as we break down all of the games throughout the week.

Mike Brey last guided Notre Dame to the NCAA tournament in 2017. The Irish should be improved this season, but are they built to knock off the Gaels in the first round of the Maui Invitational?

Entering the 2021-22 campaign, Brey noted that his team would be shifting from its extended defense to a no-middle scheme. This strategy assists with dribble penetration, but it allows for its fair share of open 3-point shots. Unfortunately for Notre Dame, Saint Mary’s offense is set up for its perimeter shooting.

Over the Gaels’ first four games, they’ve accrued a top-105 3-point scoring rate. That metric entails that a majority of their shots are via beyond the arc. Expect Randy Bennett to run his offense through 6-foot-7 big man Dan Fontu (28.4% possession rate) while working the ball out to his long-range gunners.

Both teams rank top-10 in defensive rebounding percentage — albeit a small sample size. Nevertheless, if the Gaels’ methodical half-court offense is efficient enough, it should minimize the Irish’s transition opportunities.

Expect Bennett’s unit, which has traditionally been stout at limiting teams’ looks from behind the arc, to stifle Brey’s approach. There’s still value in this number despite it getting bet down this morning. 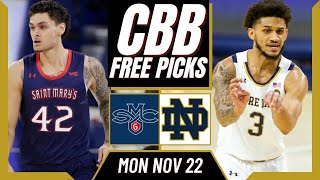