The NFL playoffs are down the final four with the NFC and AFC Conference Championship games set for Sunday. TheLines will provide daily betting breakdowns and analysis for every game throughout the playoffs. We’ll look at the odds and see why they’re moving a certain way, along with breaking down the matchup and providing the best sportsbook promotions for Conference Championship Weekend.

In the AFC, the sixth-seeded Tennessee Titans travel to face the second-seeded Kansas City Chiefs at 3:05 p.m. on Sunday. The Chiefs opened as 7.5-point favorites after coming back to defeat the Texans, 51-31, in the Divisional Round. The line dropped to 7 as of Friday morning.

The Titans beat the Chiefs, 35-32, at home in Week 10. The Titans won the previous three regular season meetings, all of which took place in Kansas City.

Kansas City is playing the AFC Championship for the fifth time in program history, but only the third time in the modern era. The Chiefs lost at Buffalo, 30-13, in 1993 and fell at home the Patriots in a 37-31 overtime thriller last year.

The Houston Oilers played in several AFC Championship games, and the Tennessee Titans made it to this round in 1999 and 2002. They beat the Jaguars in 1999 and fell to the Raiders in 2002.

The Chiefs opened as 7.5-point favorites last week against Houston and early action moved the line up to 9.5 points. Kansas City appeared dead in the water early in the Divisional Round, but showcased its offensive firepower to pull away and cover easily.

The Titans are 9-2-1 ATS since Ryan Tannehill took over at QB. Not only did Tennessee cover as road dogs at New England and Baltimore, the Titans won handily. They’re a team that is built to play from ahead, so there is an outside chance of a blowout loss, but that seems unlikely given their recent performances. The spread for this game has hovered around the key number of 7 all week.

The Chiefs overcame a slow start and absolutely throttled the Texans during the Divisional Round. Patrick Mahomes tossed four touchdowns in the second quarter for the second time this season and the Chiefs scored TDs on a playoff record seven straight possessions.

The Titans were arguably even more impressive in a 28-12 win at Baltimore. Derrick Henry ran for 195 yards and is now averaging 5.8 YPC during the postseason.

Since the Chiefs ranked 29th in DVOA rush defense this year and 6th in DVOA pass defense, it will be no secret as to how the Titans will try to attack the home team on Sunday. While KC allowed a moderate 4.5 YPC at home, the Chiefs coughed up 5.4 YPC on the road and allowed Henry to rush for 188 yards and two TDs in Week 10.

Kansas City should sell out to stop Henry, forcing Tannehill to try and beat them deep. His primary weapon, rookie WR A.J. Brown, has been held in check in consecutive games and could see more double teams from a Chiefs team yielded a league-low 151 receptions to wideouts this season.

The Chiefs did allow the third-most receptions (96) to TEs, so Jonnu Smith should be a factor. Corey Davis has also been deployed as a pseudo-TE for Vrabel’s squad. Yet clearly everything will run through Henry, who continues to ravage the NFL and has only been stopped for a loss four times all season.

The best way for the Chiefs to negate Henry is to get off to a hot start. That may lead KC to take the ball if it wins the coin toss, which makes prop bets on the Chiefs scoring first a worthwhile play.

Make no mistake, KC has a huge advantage on the offensive side of the ball. Tennessee’s secondary has been vulnerable all year and got shredded for 961 yards and 9 TDs by TEs. Reid showed just how well he can utilize Travis Kelce in the Divisional Round and he has counters installed to capitalize in the defense sells out to stop Kelce.

The Chiefs offense erupted without Tyreek Hill making much noise. Yet he’s a matchup problem for a Titans team that ranked 21st in DVOA pass defense and coughed up 55 plays of 20-plus yards this season. Sammy Watkins looked healthy last Sunday, while Mecole Hardman and Demarcus Robinson also have the speed to burn Tennessee’s larger secondary.

The Titans are 4-0 ATS with a rest disadvantage and 7-3 ATS on the road this season. They’re 5-3 when listed as an underdog and 6-4 after a win.

Andy Reid’s teams are 18-3 following a bye week in the regular season. Reid is 13-14 overall in the playoffs, although he’s 2-1 with Mahomes starting.

Watch as Matt Brown reveals his betting picks and predictions for Chiefs vs. Titans, including thoughts on the spread, moneyline, total, and props for the game. 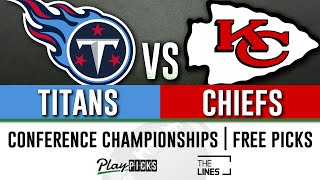