The NFL playoffs move to the Divisional Round this weekend with games on Saturday and Sunday. TheLines will provide daily betting breakdowns and analysis for every game throughout the playoffs. We’ll look at the odds and see why they’re moving a certain way, along with breaking down the matchup and providing the best sportsbook promotions for Divisional Round Weekend.

In the AFC, the Houston Texans travel to face the second-seeded Kansas City Chiefs at 3:05 p.m. Sunday. The Chiefs opened as 7.5-point favorites on DraftKings Sportsbook.

The Texans beat the Chiefs, 31-24, in Week 6. The teams split the previous two regular season meetings and the Chiefs rolled to a 30-0 home win over the Texans in a 2016 Wild Card game.

Kansas City is hosting its third Divisional Round game in four seasons, having lost at home to the Steelers in 2016 before beating the Colts at home last January.

The Texans have lost three times in the Divisional Round since 2012, including twice at New England. The other loss came at Baltimore in 2012.

The Chiefs opened as sizable favorites for good reason. They were by far the hotter team with five straight wins after their bye week by an average of 18.2 PPG. Rest will obviously play a factor with the Texans coming back from a 16-0 deficit to pull out a 22-19 overtime win against a physical Bills team Saturday.

Yet Andy Reid’s teams have a history of underperforming in the playoffs and these Texans went into Arrowhead on a sunny afternoon in October and won. Pulling out a postseason victory will be far more difficult, but Deshaun Watson could inspire enough confidence to create action on the Texans and keep this spread under double-digits.

Houston bottom 10 in defense DVOA against both the run and pass this season and coughed up the second-most yards per drive (37.64).

Since the Texans scored the seventh most points per drive (2.23) and the Chiefs were second at 2.7 points per drive, this game may appear to have the makings of a shootout. But Kansas City’s defense has stiffened lately, allowing just 10.4 PPG and 292.2 total YPG with 7 turnovers over 5 games since the Chiefs bye week.

Patrick Mahomes and company are going to be able to score in this matchup. His splits were somewhat diminished in six home starts this year, but KC still averaged 25.6 PPG in those contests. The Texans pass defense was slightly better on the road and they produced 16 sacks in those games, but also coughed up 5.3 YPC.

Houston’s best bet to stay in this game is to slow the pace and pound the rock against a Chiefs team that ranks 29th in DVOA rush defense. Luckily for the Texans, their offensive line ranked atop the NFL in power success (81%) per Football Outsiders. They ran for 141 yards and stuck with the run to come back against the Bills after falling behind 16-0 in the Wild Card round.

A healthy diet of Carlos Hyde, mixed in with shots to DeAndre Hopkins and Kenny Stills over the middle of the field should allow the Texans to keep this game relatively close.

The Texans went 4-2-1 ATS on the road this year and won a London game. Houston went 6-3 ATS when listed as an underdog.

Watch below as Matt Brown reveals his betting picks and predictions for Chiefs vs. Texans, including thoughts on the spread, moneyline, total, and props for the game. 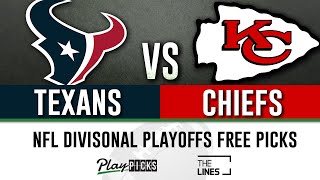