The NFL playoffs open with Wild Card Weekend games this Saturday and Sunday. TheLines will provide betting breakdowns and analysis for every game throughout the playoffs. We’ll look at the odds and see why they’re moving a certain way, along with breaking down the matchup and providing the best sportsbook promotions for Wild Card Weekend.

In the AFC, the Buffalo Bills travel to face the fourth-seeded Houston Texans in a Wild Card matchup. The Texans opened as 3-point favorites on DraftKings Sportsbook and the line moved to 3.5 as of Sunday evening.

Houston is playing in a Wild Card game for the sixth time since 2011. The Texans are 3-2 in the Wild Card round and all five matchups have come at NRG Stadium.

Houston opened as a field-goal favorite over the Bills. The line quickly moved to 3.5 and off the key number before settling back at 3 overnight. It has now moved to 2.5 with money coming in on the Bills. The total for the game sits at 43.5 as of Saturday morning after opening at 41.5.

Houston is far healthier heading into Wild Card weekend. While the Texans could still be without speedy WRs Will Fuller (hamstring) and Keke Coutee (ankle), the Bills are dealing with injuries across their roster.

Buffalo’s starting CB Levi Wallace and tackle Ty Nsekhe both suffered ankle injuries before the Bills pulled all their starters in a Week 17 loss to the Jets. Additionally, tackle Cody Ford, nickel corner Taron Johnson, and stud DE Shaq Lawson are all nursing injuries that prevented them from playing in the finale.

The potential absence of Wallace could loom large in this matchup. Buffalo figures to shadow DeAndre Hopkins with shutdown CB Tre’Davious White, but Houston has established a balanced passing game with Kenny Stills stepping up opposite Hopkins. If Wallace is inactive or hobbled, former Texan Kevin Johnson may be thrust into action as a starter.

When healthy, Buffalo’s secondary has been nails this season. The Bills rank third in DVOA pass defense and had only allowed 15 touchdowns to 14 interceptions through 16 games.

While they’ve struggled on the road in recent seasons, the Bills pass rush was even better with 27 sacks and five rushing TDs allowed through eight road tilts this year. They went 6-2 on the road and had won three straight at Miami, Dallas, and Pittsburgh before falling in a nail-biter at New England to lose a shot at the AFC East crown.

Houston will likely look to establish the run against a Bills defense that’s yielding 4.3 YPC this year. Carlos Hyde has given the Texans a new dynamic in the run game and their offensive line led the NFL in Power Run Blocking per Football Outsiders.

The Texans averaged 4.5 YPC on the ground and Deshaun Watson was lights out with a 15:4 TD:INT ratio with a 102.6 passer rating at home this season. Watson is a dual-threat playmaker with a stellar resume and his performance could carry Houston through to the Divisional Round.

Houston’s defense is well positioned to stop the run-heavy Bills offense. The Texans rank 13th in DVOA rush defense and yielded 4.0 YPC at home versus 5.3 YPC in road tilts. There’s an outside chance J.J. Watt (torn pectoral) is in uniform for this contest. The former Defensive Player of the Year returned to practice and is questionable.

Buffalo runs the ball on 46.5% of plays (fourth-highest mark in NFL), in part because their talented young QB is a bit erratic. Josh Allen has only thrown two picks since the Bills Week 6 bye, but he was sacked 15 times over his last four starts leading into Week 17 and currently ranks 25th in QBR per Football Outsiders. Watson ranks sixth according to that same rating system.

The Bills are 6-0-2 against the spread (ATS) on the road and have been underdogs in six of those contests. They are 6-4-2 ATS against AFC opponents.

Houston is only 2-6 ATS at home this season and 5-7 ATS against AFC foes. Neither team had to do much heavy lifting in Week 17 with their playoff seeds determined.

Since beating the Patriots in Week 13, the Texans have looked vulnerable. Houston’s offense was basically a no-show in a 23-20 win over Tampa and the Texans got steamrolled at home by Drew Lock and the Broncos.

The Texans have played six games this season that were decided by 3 points or fewer. Buffalo’s defense is elite and matchups up well against a Texans offense that has few weapons other than Hopkins. Taking the Bills with a 3-point cushion would be a good way to bank on a close game or another road win for underrated Buffalo.

Watch below for betting picks and predictions on the Bills vs. Texans game, including our thoughts on the spread, moneyline, total, and props. 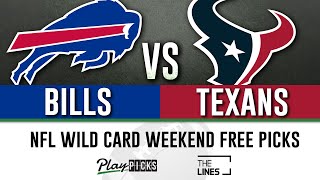