Will Essential Quality rebound after skipping the Preakness? Will Known Agenda get a good trip? Can Rombauer rumble twice in a row? 2021 Belmont Stakes picks come down to answering these questions.

Correctly handicapping Saturday’s $1.5 million Belmont Stakes will take navigating a field of eight horses, none of which has started all three Triple Crown races.

Here is how the contestants line up from Tuesday’s draw. Post time for the 1.5-mile third jewel of the Triple Crown is 6:48p ET.

With pari-mutuel wagering, the odds won’t be final until post time.

What to know before making your Belmont Stakes picks

Cinderella story from the Wood Memorial was shown that the clock struck midnight for him in the Kentucky Derby. A sentimental $2 might go on the horse who finished 13th in the Derby, but that’s it. Would need the race to collapse, considering his career-best Beyer Speed Figure of 89.

A career-best Beyer Speed figure of 100 is tied for second in this field with two others. He was wide around both turns of the Kentucky Derby but was in perfect striking position to overrun Medina Spirit, Hot Rod Charlie and Mandaloun in the stretch. He just couldn’t do it. Needs a better positioning trip and will probably get one in this smaller field. He buried Rombauer at the Blue Grass Stakes. Does that matter now? He may have peaked but is consistent. Current odds encourage use in multiple box or keys in exotic tickets.

Everything to love came out of the Preakness. He was well-rested on a five-week racing cycle and looked the part in the Preakness, stalking Medina Spirit and Midnight Bourbon before outgunning them significantly in the stretch. Definitive victory. Hard to believe this was the same horse beaten soundly by Essential Quality in the Blue Grass. Should stalk and make one run again. Preakness was one second faster at the six-furlong mark than the Blue Grass pace he chased. Should put in another good run. He posted a career-best 102 Beyer Speed Figure at Pimlico, best in this field; however, his best before that was only an 88. Can he do it again? Major contender.

I kept waiting for him to go by Medina Spirit and Mandaloun in the Derby. His handlers would be happy if he was in a similar spot with another chance. He has a good chance to be. Best Beyer of 100 is tied for second with two others in this field. Strong horse on the front end, should break alertly and be able to give his best effort. Contender. He joined Essential Quality in taking a five-week break after the Kentucky Derby. That form cycle fit Rombeaur beautifully in the Preakness. Preakness-winning jockey Flavien Prat opted to ride Hot Rod Charlie over Rombauer here.

Kentucky Derby rail post ruined him, but the Florida Derby victory must be respected. Consider this Triple Crown impact of recent race-winning graduates: Nyquist won the Kentucky Derby in 2016, Always Dreaming did it in 2017. Maximum Security claimed the 2019 Derby before being disqualified. Tiz The Law ran a game second to Authentic in the 2020 Derby. Known Agenda’s Florida Derby victory in 1:49.45 was faster than Tiz the Law, 1:50. A risky rail trip behind horses kept him in touch with the field before he swung outside around the stretch and brought the Florida Derby win home. He will be played off the Kentucky Derby excuse. Known Agenda merits a win stab. His career-best Beyer is 94. Known Agenda has unknown assessment. The Belmont will be a true test.

The fourth and final horse in the field with a triple-digit career-best Beyer (100). He’s the chameleon in this race. Ran a brilliant Santa Anita Derby on the front end to win before being pinched at the start of the 20-horse Kentucky Derby. He had to be rushed up just to join the race. That caused him to drop far back later. Finished so far back he would have needed to call a cab to be in the mix. This should be a different story. He should be on or near the lead here. Then it’s a question of if he can be rated to preserve something for the homestretch. Win odds are respectable on a horse that hasn’t proven that he can, or cannot, be rated.

He finished a game third in a five-horse, Grade II Peter Pan, at Belmont Park. He could not close on a dawdling pace. Now, Overtook takes a major step up in class. Toss candidate but race over the track and small field size will prompt some bettors to take him underneath in trifectas and superfectas. A career-best Best of 83 does not inspire confidence.

Belmont Stakes Picks and Possibilities: How I’m Looking To Bet The Race

This fits the ‘lukewarm favorites’ profile playing out over a balanced field in what’s not a strong crop of 3-year-olds. They take turns winning. That’s why the looks angle on Saturday will be important.

Any win-bet price of 5-2 and above is worth isolating from the exotics pack.

Otherwise, it looks like a combo of the 2, 3, 4, 6 and 7 comes out among top finishers. It won’t pay much if Essential Quality, Rombauer and Hot Rod Charlie all hit the top 3. It’s hard to separate them. So who merits a key?

Take any two horses mentioned above, for example the 3 and 2 in the first two slots, with 4-6-7-8 in the third and fourth position for the $1 superfecta. The cost of the ticket is $24. You can use this model for any of your projections.

Take any two horses in the first two slots with two different horses underneath in the third and fourth-place slots. That ticket costs $4. For example, 2-3/2-3/6-7/6-7. Each / separates each finishing position. Getting the right two horses on top and hoping a bomb runs third or fourth is a good way to throw a net over the potential longshot.

The key to both of these strategies: having the top two finishers. If you put two horses on top of some others in the superfecta, take an exacta box too.

If your handicapping leads you to Known Agenda or Rock Your World, place a win bet first. They should represent good prices. Then, taking a $1 superfecta with either of them on top of four horses is a $24 ticket and would pay reasonably well.

I will be trying to get the right combo right up until race time. I will sprinkle in a little extra shot for Known Agenda off the eligible-to-improve angle.

Belmont Stakes picks are definitely a challenge this year. Good luck with this puzzle.

Belmont Stakes Post-Time Favorites With No Triple Crown At Stake 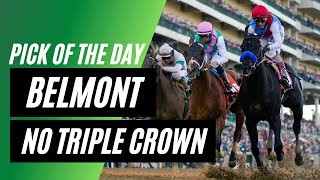