Each week, TheLines will take a look back at some of the worst sports betting “bad beats” from the weekend of college and pro football. These incredible moments caused a swing in money at sportsbooks, resulting in jubilation — and plenty of pain — for bettors everywhere.

It’s never easy betting the UNDER in college football. It’s even harder when teams combine for 14 points in the final 30 seconds.

Miami (Ohio) was in complete control leading 31-3 with just under six minutes to play. Then Bowling Green scored two touchdowns in a minute and 21 seconds to make it a 31-17 game with 4:13 remaining.

The total closed at either 55 or 55.5 at most sportsbooks across the country. UNDER bettors couldn’t allow another touchdown and it looked like they were in the clear when Miami running back Alonzo Smith busted a 29-yard run on 4th and 2 but got tackled at the 3 with less than a minute remaining.

Remember all those times you bet an OVER and a team had an opportunity to score late but instead took a knee to run out the clock?

Well, this wasn’t one of those times.

Instead of just running out the clock, Miami handed the ball off twice and Davion Johnson scored a touchdown with 34 seconds left in the game. Wow, that’s either a tough push or a close win, depending on which line you got.

If only that’s how the game ended. Remember Miami opting to not take a knee? It ended up being a costly decision for many.

In what will go down as one of the worst beats on an UNDER all season, Bowling Green got to the Miami 40-yard line with time for one last play. Quarterback Grant Loy threw a Hail Mary that got tipped into the arms of receiver Justin Sawmiller with zeros showing on the clock. Instead of a push or win, UNDER bettors were left stunned looking at a losing ticket.

By the way, it was the first touchdown of Loy and Sawmiller’s careers.

How about two bad beats in one? In one of the craziest games of the season so far, Stanford beat Oregon 38-31. However, the Ducks aren’t the only ones who suffered a tough beat Saturday.

Oregon led this game 24-7 at the half and was about to tack on another touchdown late in the third quarter when they fumbled in the red zone and Stanford’s Joey Alfieri returned it 80 yards for a touchdown. Instead of being down 24, the Cardinal cut Oregon’s lead to 24-14. While the fumble changed momentum, it wasn’t the biggest fumble in the game. Not even close.

Oregon only scored one touchdown in the second half but it appeared to be enough as the Ducks were up 31-28 and running out the clock late in the game. After a key first down run by quarterback Justin Herbert, the Ducks could essentially end the game with Stanford down to one time out. Oregon bettors could rest easily and UNDER bettors would have to settle for a push.

Verdell fumbled while fighting for extra yards with just 51 seconds remaining. Of course, Oregon could have just taken a knee but apparently, teams don’t do that anymore. The Cardinal recovered the fumble and Oregon bettors could have written the ending to the story. 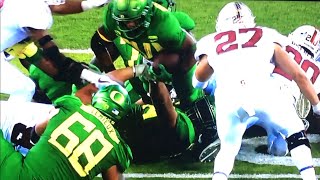 Stanford kicked a field goal as time expired to tie the game at 31. The kick also put the game OVER the total. Then after striking first in overtime, Stanford picked off Herbert on fourth down to secure the win and send Oregon -3 backers into counseling. According to ESPN, Ducks had a 99 percent chance of winning the game on two separate occasions.

The percentage of bets were split evenly on the game. However,  sportsbooks took a beating on the total with 72 percent of bets and 74 percent of the money bet on the OVER.

An honorable mention goes to bettors who had the Wisconsin/Iowa UNDER 44. Wisconsin scored twice in the final 57 seconds, including a 33-yard end around to fullback Alec Ingold when they were just trying to get a first down and end the game.

You may notice a trend here. It was an awful weekend for UNDER bettors. There weren’t many bad beats on Sunday, although the worst came on the final offensive play of the New York Giants/Houston Texans game for UNDER bettors.

The Giants led the Texans 20-9 midway through the fourth quarter in a sleepy kind of game when disaster struck. The Texans scored with 7:37 remaining on a Deshaun Watson to Will Fuller touchdown to cut the Giants lead to 20-15. The Giants responded with an Eli Manning touchdown pass Sterling Shepard with 2:08 left in the game.

UNDER bettors were still one Giants stop away from cashing a winning ticket. Houston faced a fourth and goal from the four-yard line. The total came down to one play. Watson scrambled in the pocket and hit running back Lamar Miller in the end zone with one second left on the clock. The two teams combined to score three touchdowns in the final eight minutes.

One play. That was the difference between UNDER bettors winning and losing. The books took a loss on the final touchdown as well with 69 percent of bets and 80 percent of the money going to the OVER in this game.