2021 AFC East odds are out, and they do not reflect any potential change from 2020 standings.

In 2020, the Patriots failed to win the AFC East for the first time in 12 seasons and actually finished third behind the division champion Bills and second-place Dolphins. New England responded with a record-setting spending spree in free agency but is still behind Miami to win the division. The Bills are the favorites and the second choice behind the Chiefs (+225) to win the AFC Conference outright.

Now that the full 2021 NFL Schedule is out, let’s take a closer look at the odds.

AFC East teams match up with the NFC South in non-conference play and the AFC South in non-division play this season. Each team has one away game at an AFC West opponent and one home game against an AFC North foe.

The 17th game for AFC East teams that was implemented by the NFL for 2021 comes at home against the NFC East:

Coming off a record-setting season for Josh Allen in which the Bills went 12-4 and clinched their first division title since 1995, the Bills have a relatively easy draw out of the gate. Three of their first four games are at home, but then they hit the road to face the Chiefs and Titans. The Bills also have to play both Saints and the defending champion Bucs on the road, yet still have one of the easier schedules overall thanks to matchups against the bottom teams in the AFC South and their own division.

Despite posting a 10-6 record in their second season under Brian Flores, the Dolphins missed out on the playoffs. Ryan Fitzpatrick has been shown the door and Tua Tagovailoa will be tasked with sparking an offense that finished 23rd in yards per play and 26th in third-down conversion rate. His new weapons include his former college teammate, No. 6 overall pick Jaylen Waddle, and free agent acquisition Will Fuller.

The Dolphins open in New England and close their schedule at home against the Patriots on Jan. 9. They’ll take a trip to London to face the Jaguars in Week 6 and host the Ravens on Sunday night in Week 10. While the overall winning percentage (.471) is low for Miami’s opponents, the Dolphins draw four tough non-division road games at Las Vegas, Tampa Bay, New Orleans, and Tennessee.

Clearly disappointed by a 7-9 season while Tom Brady won the Super Bowl in his first campaign away from New England, the Krafts opened their pocketbooks and allowed Bill Belichick to spend a record $250 million to sign over 15 players. Cam Newton returns at QB on another one-year deal, and the Pats seemed to build around him by signing hard-nosed tight ends Hunter Henry and Jonnu Smith. Their defense is set to improve dramatically with Kyle Van Noy rejoining the fold and Dont’a Hightower returning after a voluntary absence during the 2020 season.

The Patriots have a premier home matchup on Sunday night in Week 4 against Brady and the Bucs. They also host the Cowboys in a 4:25 p.m. game in Week 6 in another game that should draw high ratings. They host a surging Browns team in Week 10 and don’t have their Bye until Week 14 after a Monday night showdown at Buffalo. They come out of the bye week with a possible flex game at Indianapolis and a rematch against the Bills.

It was past time for the longshot in 2021 AFC East odds to undergo a regime change and now they have a new coach (Robert Saleh), QB (No. 2 overall pick Zach Wilson), and GM (Joe Douglas). Saleh and Douglas set about building a defense with toughness by franchise tagging Marcus Maye and snaring safety LaMarcus Joyner in free agency. The Jets also signed Corey Davis, Keelan Cole, and Tevin Coleman to give Wilson some more possible weapons in his rookie season. The team also drafted WR Elijah Moore and RB Michael Carter.

While they’re projected to win 6 games, the Jets open as 4.5-point underdogs in Carolina and might only be favored twice this season when they host the Bengals in Week 8 and Jaguars in Week 16. They face the Falcons in London in Week 5 before their Bye week and their only primetime game is a Sunday night matchup at Indianapolis in Week 9. 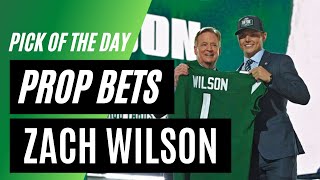