The NFL playoffs continue with the Divisional Round this Saturday and Sunday. TheLines will provide betting breakdowns and analysis for every game throughout the playoffs. We’ll look at the odds and see why they’re moving a certain way, along with breaking down the matchup and providing the best sportsbook promotions for the Divisional Round.

The Minnesota Vikings and San Francisco 49ers will face off at Levi’s Stadium for an NFC Divisional Round game on Saturday afternoon. The game will mark the 48th meeting in a series that is tied 23-23-1. This marks the sixth postseason meeting between Minnesota and San Francisco. The most recent regular-season game between the teams unfolded Week 1 of the 2018 season, a game the Vikings won by a 24-16 margin in Minnesota. The last postseason contest between the Vikings and 49ers unfolded on January 3, 1998, when San Francisco notched a 38-22 home in a Divisional Round playoff game.

The 49ers were 6.5-point favorites on both FanDuel Sportsbook and DraftKings Sportsbook as of Monday morning. Both squads were solid against the number during the season. However, it bears noting that as good as the Niners’ home metrics were, they actually had a sub-.500 record against the spread at Levi’s Stadium (detailed further below).

Much like their AFC counterparts in Tennessee, Minnesota was able to topple a conference powerhouse despite that team’s considerable home-field edge in the Wild Card round. In the Vikings’ case, their overtime defeat of the Saints certainly gives them confidence for this next challenge, although this time they’re facing a squad that has that coveted one week of extra rest.

The opening projected total of 45.5 points was the lowest of the four divisional-round contests and has dropped to 44 as of Friday afternoon. That’s not necessarily surprising when considering the 49ers will come into the contest having allowed the fewest yards per home game (266.8), — including the fewest passing yards per home contest (157.9) — and the ninth-fewest points per home game (19.6) as well.

The Vikings’ overtime win against the Saints on Sunday was a study in balanced offense and opportunistic defense in one of the toughest road environments in the league, and against a future Hall of Fame quarterback to boot. New Orleans defense also presented a formidable challenge, making the Vikings fight for every yard. But, on paper at least, that was just a tune-up for even fiercer – and more well-rested – 49ers squad.

Minnesota quarterback Kirk Cousins helped take a proverbial monkey off his back by winning a high-stakes game with a clutch touchdown pass to Kyle Rudolph in overtime against the Saints. Now, he’ll be hard-pressed to prove he can move his team to one game from the Super Bowl. The 49ers were the league’s stingiest home-field secondary in the NFL with an absurd 157.9 passing yards per game allowed. San Fran also picked off 12 passes overall and averaged an NFC-high 3.6 sacks per home game as well. Cousins was only picked off on six occasions this season, but he was taken down 28 times, including seven in the last pair of contests. With Minnesota’s passing game heavily centering on Adam Thielen and Stefon Diggs when both are healthy, San Francisco will know exactly where to focus their efforts, which could make life all the more difficult for Minnesota’s air attack.

Therefore, the ground game is where the Vikings could have their best chance at sustained success. Dalvin Cook started off highly efficient against New Orleans’ stingy run defense before slowing down later in the game, but he finished with a season-high 28 carries. Such a heavy workload may be on tap again Saturday if coach Mike Zimmer utilizes the 49ers’ elite pass defense as one more reason to roll with his preferred strategy of a run-centric attack. Plus, the matchup on the ground against San Fran actually hasn’t been prohibitive. The Niners allowed 108.9 rushing yards per contest at home during the regular season and surrendered 4.2 yards per carry to running backs overall.

On the San Francisco side of the equation, Jimmy Garoppolo and his receivers will have the benefit of facing a Vikings defense that surrenders 252.4 passing yards per road game, the 11th-highest figure in that category this season. The 49ers were the top scoring home team in the NFL (32.4 PPG) and Garoppolo averaged 7.9 yards per attempt at Levi’s Stadium.

The Niners’ passing attack became more diversified once Emmanuel Sanders arrived midway through the season and rookie Deebo Samuel began to emerge with an eight-catch, 112-yard effort versus the Seahawks in Week 10. The positional matchup for star tight end George Kittle is also an interesting one – Minnesota allowed the sixth-most receptions (84) to the position this season, but only one touchdown reception.

The 49ers’ ground game could be a bit more challenged to succeed. The Vikings have limited opponents to just 104.8 rushing yards per road game, a figure that factors in the 97 yards they allowed to the Saints on Sunday. San Francisco boasts a three-headed backfield of Matt Breida, Raheem Mostert and Tevin Coleman. Each back brings a different skillset and all are capable of serving as receivers with varying degree of effectiveness.

The all-time series between the Vikings and 49ers is tied, 23-23-1. The Vikings have won six of the past eight games in the series dating back to Oct 24 of the 1999 season.

Watch below as Matt Brown breaks down his betting picks and predictions for Vikings at 49ers, including his thoughts on the spread, moneyline, total, and props for the game. 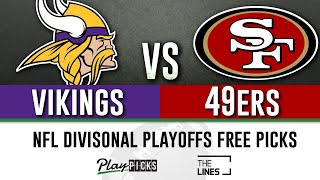