Group play is done. It’s the knockout stages of the 2018 World Cup.

With Germany gone and the appearance of almost NCAA tourney level parity (ok, that’s a stretch, but still…) affecting the World Cup, and one side of the knockout bracket clearly stronger than the other, odds for the prohibitive favorites surely have shifted, right?

The more things change the more they stay the same

Brazil and Spain were favorites pre-tournament. They’re the two favorites today. They’re on opposite sides of the bracket. They could very well meet in the finals.

Odds for Brazil are roughly between 3-1 and 4-1 at various books.  Spain has the easier path the finals. They are locked in solidly at 4-1 at most books.

Brazil and Spain should be favorites. Both countries have looked strong. Spain has the easier path and is the safer play. Plus we all know Sergio Ramos will go full on Cobra Kai and just cheap shot any potential attacking threat out of the tournament for Spain.

Websites like 538 seem to agree with those odds. Despite being in the “Bracket of Death,” 538’s analytic model gives Brazil a 25% chance of being Cup champs. Spain is at 20%. No other team hits double-digits.

But if it was somebody else…

We’ve been saying all along that Belgium was legit. They were a strong value at 10-1 to 12-1 pre-tournament. Both 538 and Vegas give them the third best overall odds to capture the Cup (9% and 7-1, respectively).

What about England? Despite drawing Colombia in the Round of 16 and, well, being England, both 538 and sportsbooks have The Three Lions as fourth overall favorites (8% champ and roughly 8-1 odds).

If you’re really value hunting, Croatia and Uruguay have looked strong. Croatia has a much easier path to the finals and are 6% on 538 and 12-1 odds. Uruguay has to survive Cristiano Ronaldo’s Adam’s Apple in the Round of 16 and make it through the Bracket of Death to the finals, so 538 only gives them a 3% chance of winning it all. Vegas has them close to pre-tournament odds at 22-1. Uruguay can score on anyone though and soccer is fluky when it comes to attempting and converting shots. If you have two of the best strikers in the world like Uruguay, it’s like playing the Golden State Warriors: if the shots are draining, forget about it.

Similarly, if you have a goalie like this, well, anything can happen. 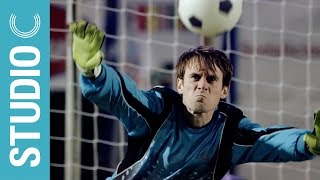